People with traumatic brain injuries, caused by a blow or jolt to the head, often find it difficult to have meaningful relationships with others. One such reason is an inability to recognize someone’s facial expression of emotions or feelings. 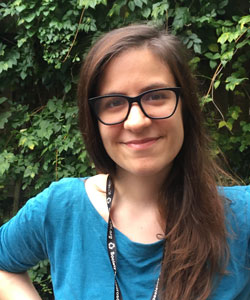 Arianna Rigon’s dissertation research advanced the understanding of the underlying cognitive and neural networks responsible for the impairment of facial affect recognition. One of her studies showed that individuals with traumatic brain injury (TBI), who had impaired affect recognition, displayed less activation than healthy comparisons in the fusiform gyrus, a brain region involved in face processing.

The Graduate College awarded Rigon with the Rex Montgomery Dissertation Prize for her dissertation, “Structural and Functional Neural Networks Underlying Facial Affect Recognition Impairment Following Traumatic Brain Injury.” Rigon, who earned her Ph.D. in neuroscience at the University of Iowa in 2017, will be honored during a ceremony at the James F. Jakobsen Graduate Conference in March 2019.

“Even though people with TBI are able to recognize faces, they can have problems understanding what other people are feeling or thinking based on facial cues, which is very important for navigating one’s social environment,” Rigon says. “This has consequences long term because if you’re not good at understanding what others are feeling, you’re not going to adapt your behavior based on that and that will influence your social interactions.”

The cause of facial affect recognition impairment

While much of the TBI research focuses on memory and concentration, Rigon is expanding the study into the social sphere.

Using magnetic resonance imaging, she determined that higher levels of brain region connectivity were associated with better performance on both tasks in healthy individuals. Results also indicated that individuals with TBI who had impaired affect recognition showed less activation than healthy comparison in the fusiform gyrus, a brain region involved in face processing.

“Social and emotional disorders are a leading cause of disability and negative outcomes in TBI,” says Melissa Duff, former associate professor at the University of Iowa, Rigon’s co-dissertation advisor, and current associate professor at Vanderbilt University. “The overarching goal of Dr. Rigon’s research program is to advance the clinical management of social and emotional disturbances, and thus long-term outcomes, by advancing our understanding of their underlying cognitive and neural mechanisms.”