Preterm birth (before 37 weeks) affects approximately one out of every ten infants born in the United States, resulting in significant medical problems. 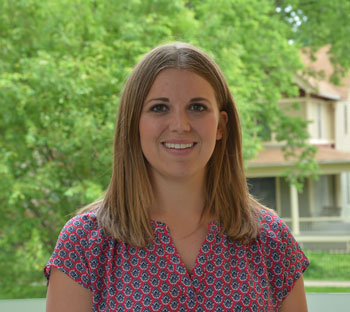 Allison Momany, a doctoral candidate in clinical psychology at the University of Iowa, is developing a dissertation project to examine the role of neonatal morbidities, such as bleeding in the brain and hypoxia, among preterm youth in predicting ADHD.

“I would like to inform parents and pediatricians who will do follow-up work with these children,” says Momany, who received a Post-Comprehensive Research Award from the Graduate College to support her work. “I hope we can figure out treatments that buffer against negative long-term outcomes of preterm birth.”

Momany intends to research how the severity of neonatal morbidities may be linked to the development of ADHD by utilizing a data set from the University of Iowa Hospitals and Clinics High-Risk Infant Follow-Up Clinic. The data includes parental ratings of behavior and early developmental testing.

In addition, she plans to identify the neurocognitive processes, like memory, inhibition, and speed of information processing, which may link pre-term birth to ADHD. To do this, she will recruit children, ages 6-10, for a follow-up study about neurocognitive and socio-emotional deficits.

Momany’s work also attempts to distinguish risk associated with being born early from risk that may be due to the interventions that many preterm youth may receive.

“Identifying areas of neurocognitive functioning that may be impacted by preterm birth may offer intervention targets for parents and therapists to work on strengthening when youth are younger,” says Molly Nikolas, assistant professor of psychology and Momany’s co-mentor. “Providing boosts to neurodevelopment early on may be successful for preventing ADHD and/or reducing the severity of the symptoms.”

Momany has a passion for conducting research. Her research career began in 2006, working in UI Professor Jeff Murray’s lab while she was a senior at Clear Creek Amana High School.

Kelli Ryckman, an associate professor of epidemiology and Momany co-mentor, was a postdoctoral scholar in Murray’s lab in 2009, when she first meet Momany. For the past eight years, Ryckman has witnessed her mentee grow as a researcher and a person.

“She is the most positive, hardworking, enthusiastic, and passionate person I have ever met,” Ryckman says.

Momany is an integral member of the Iowa Perinatal Health Research Collaborative, launched by Ryckman in April and pilot funded by the College of Public Health to examine outcomes in children born preterm and with low birth weight.

“Her research has evolved from working on the genetic causes of preterm birth and complications of prematurity to studying clinical psychological, behavioral, and cognitive outcomes in children born preterm or low birth weight,” Ryckman says. “Her recent work is a meta-analysis that synthesizes all of the publications to-date on associations between birth weight and ADHD.”

Momany’s strong work ethic has translated into an impressive publication record. In 10 years of research, she has published 16 papers, including five in the last year.

Momany was first author on a UI research paper published in 2017 in the Journal of Abnormal Psychology. This study of birth weight and ADHD showed that low birth weight increased risk for ADHD and other externalizing disorders and that effects were stronger for males compared to females.

“I just like doing the research part. I think it’s fascinating to think about things you don’t know, the hypotheses you form, and trying to figure out the answer in a systematic way,” Momany says. “Jeff Murray once said to me that even if you get a negative finding that’s not significant you might be the first person who looked at that and knows it’s not significant. Even if I can’t publish it, I know something.”