In 2001, U.S. Department of Education statistics showed that African Americans made up only 9.4 percent of all administrators at U.S. colleges and universities. 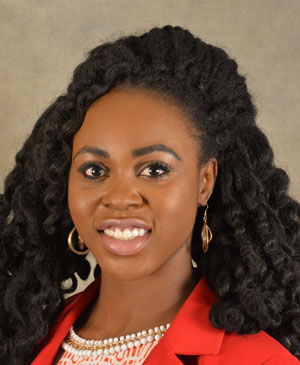 Anderson, a Ph.D. student in higher education and student affairs at the University of Iowa, is motivated to create more diversity around the leadership table in academia.

“I come from the mindset that if there’s not enough room at the table, I will pull up more chairs for other people to join,” says Anderson.

Anderson wants to share with society multiple stories of what it means to be an African American in academia. She researches educational inequities that create challenges, such as socioeconomic status, level of privilege, and access to education, with a special focus on African American college women at predominately white institutions. Her goal is to empower these women to overcome these obstacles and create better outcomes for themselves.

Anderson realizes creating a new narrative wouldn’t be possible without funding from the ACT Scholars Program.

“ACT and the University of Iowa Graduate College got it right,” Anderson says. “They provide an opportunity for underserved learners, like myself, to be a fulltime scholar. For a long time, socioeconomic status has been a barrier for a lot of students. Without the ACT scholarship, I would not be able to afford to be a student and focus on my education.”

ACT scholars are required to participate in at least one paid ACT summer internship prior to graduating from his/her academic program. Last summer, Anderson furthered her research interests with an ACT internship.

Anderson worked in ACT’s Center for Equity in Learning, which supports research that focuses on closing gaps in equity, opportunity, and achievement. She also attended ACT’s Enrollment Planning Conference and talked about how to better make opportunities in higher education available for underserved students.

“The Center for Equity in Learning’s mission aligns with mine because it helps underserved learners achieve success in college and the workplace,” Anderson says. “This rare opportunity has made me an ambassador for ACT, because their mission and my personal passions strongly correlate.”

Anderson is an active listener, responder, and researcher who focuses on the challenges faced by African American female students.

“The work we do finding those equity opportunities for underserved populations and trying to balance the playing field for all students to achieve education and workplace success is tough work,” says Lew Montgomery, program director for community engagement in ACT’s Center for Equity in Learning. “We challenged her with some difficult research data to sift through and asked her to create a framework for us to work from moving forward. She exceeded our expectations. She is a natural leader with an outstanding personality and attitude.

“I meet several people daily, but every once in a while you meet that one person who simply has something special, and she has it. I know she will do very well in whatever she pursues after her doctoral program is complete.”

Anderson is a member of Professor Sherry Watt’s multicultural initiatives research team. This group of scholars researches how to develop skills and strategies for facilitating difficult dialogues across cultural differences. Anderson is completing a manuscript with Assistant Professor Cassie Barnhardt and fellow graduate students, Laila McCloud, Ryan Young, and Carson Phillips on a new finding of faculty and African American female student engagement.

“Oftentimes research is provided by certain authors who share a one-dimensional perspective,” Anderson says. “Exposing society to multiple narratives from the lens of African Americans and what it means to be an underserved learner in higher education can help provide better insight.”

Through all her work, Anderson is positioning herself to change the narrative and help African American women succeed in higher education administration.