Mark Pooley, a 2013 Obermann Graduate Fellow, is committed to thinking about how to make bicycle commuting more accessible, an issue he explored as a master’s student in the School of Urban and Regional Planning and now as a Ph.D. student in civil engineering.

Contributing to his graduate research about transportation, Pooley organized the Winter Warrior Bike Challenge last December in Iowa City along with the University of Iowa’s Office of Sustainability and the UI Bicycle Advisory Committee. More than 200 people participated the winter challenge from Dec. 1 to Dec. 20. 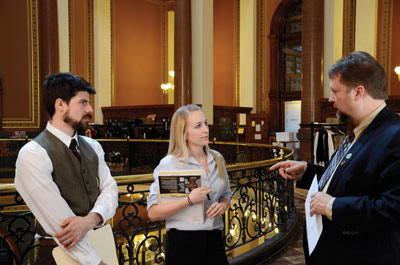 “We were able to encourage people to ride during the winter months when temperatures reached negative 16 degrees. There were roughly 3,000 trips made and 8,300 miles ridden,” says Pooley, about his Obermann Center project titled, “What Gears Bicycling Commuting?”

“Through very simple means, we have the possibility of diversifying our transportation mode choice. If we can work with the university and the city, which we are currently in the process of doing, to improve bike infrastructure and make more [bicycle] parking available, then we can make biking an increasingly attractive community choice.”

Raised in rural Johnson County between Solon and Iowa City, Pooley says there are plenty of disincentives for biking, including a lack of infrastructure, physical exertion, and weather.

Would incentives prompt people to change their bicycling habits? Pooley administered an attribute-based preference survey to determine the relative importance of three incentives—infrastructure, parking, and financial—in encouraging the community to bike. He is trying to understand how bicycle commuters make trade-offs between on-street bicycle facilities (e.g., bike lanes), destination parking options, and a potential employer incentive for riding a bicycle (e.g., a monthly allowance/stipend).

“I learned that infrastructure and parking are the most important of the three incentives and financial was the lowest,” Pooley says. “Using recognition, small financial incentives, or a chance of attaining these incentives is easiest to implement. It’s not so easy to impact parking and infrastructure.”

Pooley’s doctoral work includes using open source data sets to understand travel behavior and mode choice and how we can improve our transportation systems and make them more democratic. This research is a continuation of his Obermann project.

Pooley said that the UI Bicycle Advisory Committee, which was started two years ago and is comprised of a good mix of students, staff, and faculty, echoes what he learned at the Obermann Graduate Institute regarding collaboration.

“One of the many aspects the Obermann Institute emphasized was building partnerships with mutually beneficial goals in mind,” Pooley says. “Working to improve bikeability at the University of Iowa would be a daunting task for an individual, but working with a group to develop practical and realistic ideas and solutions makes this objective attainable.”

Pooley studied transportation planning in the School of Urban and Regional Planning.

As a second-year planning student, Pooley and his fellow group members in the Field Problems in Planning course completed an alternative transportation project in Dubuque that provided a set of recommendations to city officials for diversifying and expanding their transportation options.

“We organized a lot of focus groups using novel methods,” Pooley says. “It was pretty cool to pull out qualitative elements and quantify them. We evaluated the relative importance of all these aspects. It allowed us to provide a prioritized list of what the community was really seeking.”

Professor Paul Hanley was Pooley’s advisor for the Field Problems project. “(Professor Hanley) showed me how to evaluate a transportation network in a city,” Pooley says. “You can look at transportation modes individually, but also collectively to see how they’re linking up and where you might have discernible gaps in your transportation system.”