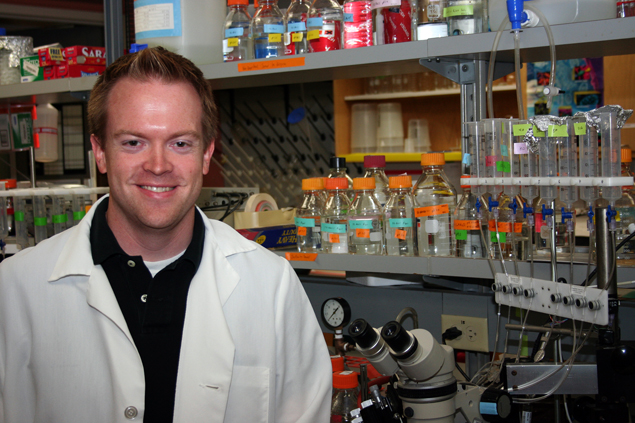 Despite these high morbidity rates, the underlying cause of high blood pressure, or hypertension, is unknown in most patients.

One way our bodies regulate blood pressure is through balancing the amount of sodium retained at the cellular level. Daniel Collier’s research at the University of Iowa focuses on understanding how a protein called the epithelial sodium channel (ENaC) regulates sodium excretion and sodium reabsorption in the kidney collecting duct. Some hereditary forms of hypertension are due to defects in ENaC activity.

Collier’s outstanding publishing record (eight articles in the last four years) and significant contributions to his research field led to winning the in the biological and life sciences category. His dissertation is titled “Regulation of Epithelial Sodium Channel (ENaC) Activity by Extracellular Stimuli.”

Collier, who earned his Ph.D. in molecular physiology and biophysics in 2011, has identified new stimuli that regulate ENaC. His research also explains how ENaC works to help cells to adapt quickly, adjusting rates of sodium absorption in response to changes in sodium intake.

“Dan’s thesis project provided novel insights into the structure of ENaC and the dynamic molecular mechanisms that control channel gating,” says Christopher Benson, associate professor of internal medicine and collaborator with Collier on several projects. “His work has important implications for understanding and treating diseases such as hypertension and cystic fibrosis.”

Collier’s research career started with a simple observation that other scientists in the field had overlooked.

“No one had recognized that ENaC was pH sensitive,” says Collier, a native of Newton, Iowa. “A lot of people used mouse or rat ENaC, so they could use mouse or rat models. Our lab tends to use ENaC from human complimentary DNA (cDNA). That opened new doors for us to go back and compare humans with mice and rats. This led to more discoveries.”

Collier discovered that although human ENaC are activated by acidic pH and inhibited by alkaline pH, rat and mouse ENaC are not. He then developed a strategy for identifying the amino acids that allow pH to regulate ENaC. From there, Collier discovered how proton binding activates ENaC.

“Dan’s work begins to teach us about the dynamic changes that control ENaC activity,” Snyder says. “His work provides a framework to investigate new mechanisms that may lead to human disease and suggests novel therapeutic strategies to target ENaC activity in order to treat hypertension and other diseases of disordered extracellular volume control.”

Collier hypothesized that ENaC senses changes in the extracellular environment. He viewed chloride as an attractive candidate for regulating ENaC activity since its concentration is very low during volume depletion, but becomes elevated with volume excess.

Collier also found that protons and chloride both interact with specific binding sites in the extracellular domain of ENaC, inducing changes that activate or inhibit ENaC gating.

“Dan was the first to discover a novel feedback mechanism that allows ENaC to sense and respond to changes in extracellular pH,” says Peter Snyder, professor of internal medicine and Collier’s dissertation advisor. “This project illustrates one of Dan’s strengths—by paying attention to details and pursuing an unexpected result, he made an important discovery that has had a large impact on our understanding of epithelial sodium transport and blood pressure regulation.”

Collier earned his undergraduate and graduate degrees at the University of Iowa and continues at the UI as a postdoctoral research scholar in internal medicine.

At all three stops along his academic journey, Collier has spent time in the Snyder Laboratory. He started washing lab dishes as an undergraduate, then became a research assistant before beginning his Ph.D. work.

“(Working in this lab) is something I really enjoy, and I’ve stuck with it,” Collier says. “Dr. Snyder has always treated me like I’m one step above where I am. For example, while I was a graduate student, he treated me like a postdoc. It’s an ideal combination of being supportive when I have questions, but really driving me to figure things out on my own and chase down what I think is interesting.”

Collier has published his research as first author in four articles in the Journal of Biological Chemistry. He has also published four collaborative papers.

“Dan is a critical thinker, with a rigorous approach to science,” Snyder says. “He is not afraid to do the key experiment to disprove his hypothesis. He loves to present his work, to defend and extend his ideas, and to get feedback from other investigators. It has been tremendously rewarding to watch Dan grow as a scientist.”