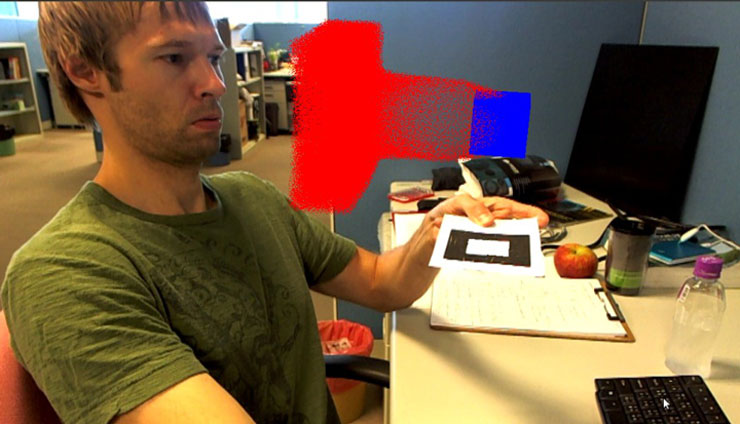 If diagnosed with lung disease, you may use an inhaler to breathe medicine straight into the lungs’ airways. However, the medicine’s exact destination in the lungs is unclear.

University of Iowa Professor Ching-Long Lin and his collaborators have been developing a digital model of the human lung to simulate the motion of particles—which can be pollutants or pharmaceutical particles—through the lungs in order to diagnose how airflow through the lung’s airways can lead to illness.

“Air needs to be uniformly distributed throughout the lungs, but asthmatic people, for instance, have more air transported to the upper lobes,” Lin says. “We want to predict a medical condition before it happens, so we try to identify biomarkers that allow us to distinguish between normal lungs and diseased lungs.”

Using computed tomography (CT) scans acquired by Eric Hoffman, UI professor of radiology, to construct the structure of the human lung, Lin utilized his background in computational fluid dynamics (CFD) to simulate airflow and aerosol transport through the lungs.

Modeling air flow in the human lungs is a challenging task because of the complexity of airway structure and the large amount of data and computational time, requiring the use of a central processing unit (CPU), such as the UI’s high-performance computing cluster—dubbed Helium— and national parallel computing resources from the Extreme Science and Engineering Discovery Environment. This digital lung model consists of several building blocks, including geometrical modeling, CFD, particle tracking software, epithelial cell modeling, image registration, and visualization.

GPUs, often used as video cards for personal computer games, perform the same set of instructions on different pieces of data in parallel. A major advantage of using video cards for parallel computing is their relative low cost, ranging anywhere from a hundred to a couple thousand dollars.

“In particle tracking, we’re releasing tens of thousands of particles and we’re tracking them individually,” says Ellingwood, a Presidential Graduate Research Fellow. “My code for particle tracking has really made a big difference, running 24 times faster than the CPU-based version.”

The ability to use a GPU to solve problems quickly allows for exciting possibilities, such as real-time visualization of results.

“(Image registration) is an important tool for medical imaging analysis. It matches two images of the lungs to derive regional ventilation that affect aerosol distribution in the lungs,” Ellingwood says. “Typically, it takes about 2 1/2 hours to register a pair of lung images using a high-end 32-core CPU. With the aid of a GPU, it now only takes 50 minutes. This is critical when analyzing a large amount of image data.”

This digital lung model remains in the developmental stages and isn’t being used in the treatment of patients.

“We have a long term goal of making our digital lung model commercially available,” Lin says. “Right now, we don’t have a nice user interface. There is a learning curve for our students to use it right now.”

Ellingwood used the grants to initiate collaborations and enrich his research experience in an international setting. He worked with Matthew Smith, an internationally known expert in GPU computing who is a professor at National Cheng Kung University in Taiwan.