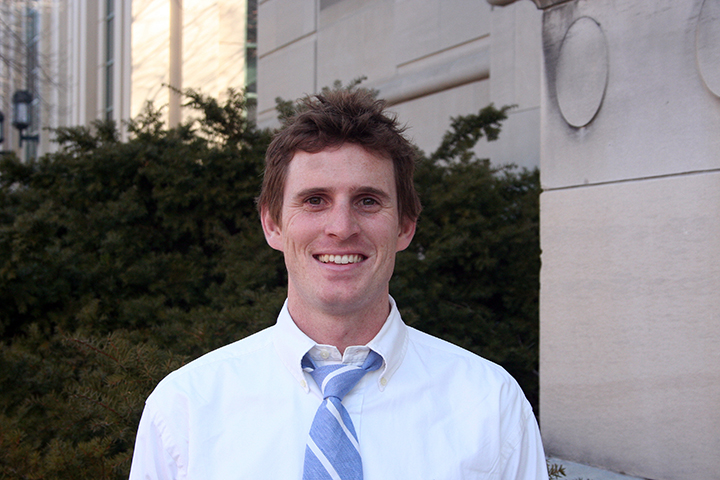 Four hundred years ago, Rene Descartes earned notoriety as the “Father of Modern Philosophy” for establishing a philosophical distinction between mind and body. University of Iowa doctoral student Brian Collins admires Descartes’ seminal work and uses it to show that philosophy is as relevant today as it was centuries ago.

Collins believes the study of philosophy helps students in all fields develop important analytic skills. For example, law schools encourage philosophical study as preparation for the rigors of a law education, while both the social and physical sciences require students to distinguish sound reasoning from faulty.

“Philosophy plays a direct role in education because it teaches critical-thinking skills,” says Collins, a Ballard Seashore Dissertation Year Fellow. “I think philosophy should be taught at all levels of school," because it leads students through the thinking processes required to justify specific positions on important issues. "That is what philosophy is at its core.”

Collins and Richard Fumerton, UI professor of philosophy, have prepared and will teach the extended-learning course An Introduction to Philosophy Through Film for high school students. Seniors at Iowa City West, Iowa City High, and Linn-Mar (Marion) will take this pilot class in spring 2014, with the goal to make the course available to students statewide.

Fumerton and Collins will offer this pilot course at no cost to students, who will receive three semester hours of course credit at the University of Iowa.

“The course will introduce a number of topics in philosophy by tying issues raised in classical philosophical readings to themes of some popular films,” Fumerton says. “Brian has experience teaching philosophy through film for our department, and he also has valuable experience teaching both middle school and high school students.”

Students will view three online lectures: Appearance and Reality, The Identity of Person through Time, and What Makes Right Acts Right? Next, they will gather in groups to view films such as The Matrix and Heaven Can Wait, with informal discussions immediately following each showing. Students will read assigned materials to prepare for Skype discussions with Collins, the teaching assistant for the course. As the course continues, Collins and Fumerton will hold in-person discussions with students to help them hone their reasoning skills.

Collins invites us to hone our abilities to reason. Consider the concept of free will. Do you believe you are free to choose your path in life, unfettered by other forces or factors? How might you go about finding your answer to this question?

Here's the real challenge: once you've formed your opinion, how well can you defend it?

To try your hand at critical thinking, Collins suggests examining two well-studied philosophical theories of free will. Libertarianism is the view that we have free will only if we are unconstrained by outside causal influences. Compatibilism is the view that outside causal forces may influence our will, but our will can still be free within that constraint. For compatibilists, our free will can exist alongside—is compatible with—external causal forces; our freedom is constrained but not eliminated.

For example, a compatibilist would view the influence of our genetic make-up as a "constrained freedom," a causal force that determines some aspects of our lives, but within which we are still free to exert our own will. In contrast, a libertarian would view genetics as a causal force that eliminates our free will. For a libertarian, free will exists only when there are no constraints.

What's YOUR view, and why?

Do humans have free will even if our will is constrained by outside influences?

To approach this question, Collins suggests learning about the views of philosophers such as Descartes. Gaining a thorough grounding in the writings of the world's great thinkers is an important step that sets the stage for further learning.

Collins says that in developing one's critical-thinking skills, Descartes' actual views, although important, are not the primary focus. Rather, as learners, we gain thinking skills by taking a position on Descartes’ views and then supporting our position with sound reasoning.

“It’s all about the process and skills philosophy helps you develop in examining issues,” Collins says. “If you think about the study of philosophy that way, then you can apply it to whatever field you go into.”

To practice your critical-thinking skills, you can read more of Collins' research in “Adding Substance to the Debate: Descartes on Freedom of the Will,” published in Essays in Philosophy July 27, 2013.