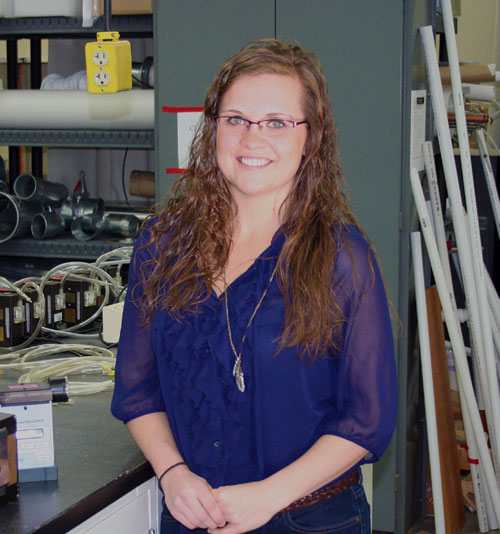 Since the mid-1980s, researchers in the Industrial Hygiene Graduate Program at the University of Iowa have known that concentrated animal feeding operations (CAFOs) can be hazardous environments for workers.

The literature shows that if a worker spends four hours on a given day in these CAFO barns without wearing protective gear, he/she will leave work with cold and flu symptoms among other respiratory problems.

Kelsie Reeve, a second-year Master’s student in industrial hygiene, is part of a UI team investigating how to create a ventilation system inside swine farrowing barns, which will reduce the workers’ exposure to contaminates generated by these operations, while positively affecting production.

Reeve is examining the efficiency of underground pit fans inside CAFO barns during cold winter months. She also is mapping the distribution of air contaminants—such as ammonia, dust and hydrogen sulfide—inside a test center barn at Kirkwood Community College. Reeve installed a dust tracking monitor and a multi-gas meter at breathing zone height to measure concentrations of ammonia and hydrogen sulfide.

In CAFO barns, pigs are housed in crates, which are positioned over pits that collect sewage. As sewage accumulates, workers in these barns are exposed to dust, ammonia, and other chemicals that are associated with bronchial inflammation, bronchitis, and other respiratory problems.

UI researchers are currently analyzing data collected by the dust track monitor and multi-gas meter.
Rather than move the air in just one direction through an exhaust system to the outside, they propose using fans to treat and recycle the air. This would improve air quality for humans and young piglets alike, while also reducing heating costs.

“If our solution improves air quality inside the barn by treating the air and recycling it, then we also eliminate emissions into the neighboring communities,” said UI Assistant Professor Renée Anthony, Reeve’s mentor and faculty member in industrial hygiene. “Our primary drive is to reduce the concentration of contaminates for the workers.”

According to the United States Department of Agriculture’s National Agricultural Statistics Service (NASS), Iowa is the top pork producing state in the United States and the top state for pork exports. At the end of 2008, Iowa had 8,300 hog operations, and approximately 30 million hogs are raised in Iowa each year.

“The bottom line is that ventilation costs money,” Anthony said. “Farmers won’t voluntarily install and operate a system to reduce concentrations unless it has a positive impact on the bottom line.”

UI Associate Professor Tom Peters, a faculty member in industrial hygiene, is researching scrubbers and filters that could be used to remove the hydrogen sulfide, dust and ammonia particles from the air, so the air can be cleaned and brought back into the building.
But not just any air can return to the building.
In the winter, warm air leaves the building and cold air returns. This is a problem for the young pigs, who need temperatures in the 70s to thrive.
“Can we pull air out of the room, clean it, and reintroduce the warm air back in?” Anthony asks.
That is a big challenge.
This five-year project began in October 2011 and is funded by a grant from the National Institute of Occupational Health and Safety.