In a life dedicated to research, Sarit Smolikove knows she may not find all the answers, but her discoveries are a step in the right direction.

Smolikove examines the separation of chromosomes during meiosis to understand the causes of developmental disabilities and miscarriages during pregnancy. 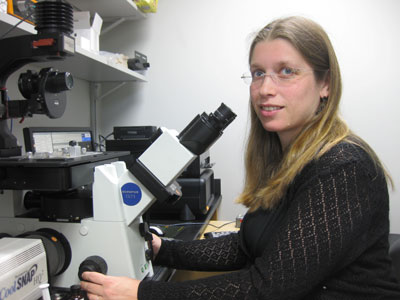 Originally from Israel, Smolikove came to Harvard for a postdoctoral position. Following her post doctorate, she accepted a position at the University of Iowa as an assistant professor of biology and faculty member in the interdisciplinary graduate program in genetics and has continued her research.

During the first phase of meiosis, chromosome segregation occurs. The chromosomes are then reduced and paired up during a crossover process. It is at some point during this period that an aneuploidy – an imbalance of chromosomes – can develop, resulting in miscarriages or developmental disabilities and mental retardation.

“These occurrences are a very urgent problem, because there is an increase in women giving birth later in life and they can have problems with infertility and have children with developmental disabilities,” Smolikove said. “It’s important to identify the genetic causes.”

The obstacle Smolikove and her fellow researchers face is the difficulty of studying meiosis as it occurs in the human body. So instead, she relies on a simpler, multicellular organism called C. elegans. Smolikove said by cloning the genes and screening for additional proteins she is able to study the meiosis process and identify the specific genes responsible for forming the proteins that contribute to the imbalance.

The length of the meiosis phase, which varies depending on the organism, makes it difficult for researchers to pinpoint which genes may be involved and at what point. Smolikove said there needs to be a solid understanding of how meiosis happens in simple organisms like C. elegans before she can begin to understand what takes place in humans. She acknowledges that such discoveries may not occur within her lifetime.

So it’s up to future scientists to continue the work. Even so, Smolikove remains undiscouraged, knowing that this is how scientific progress is achieved.

“Every single scientist is adding a building block to the story. So I’m not going to say that I’m going to be the person who will solve all the problems in female infertility,” Smolikove said. “But I will certainly contribute to that and I’ll be happy enough if I could find genes that are implicated in this process. Someone else is probably going to take that and use the information to continue the discovery.”