Teaching philosophy beyond the classroom

Laura Brown went to law school fully intending to practice law, but even as a student, she realized something was missing. She wasn’t delving into her true passion—the logic and philosophy behind each law.

In order to reconcile this, Brown left her position as an attorney in 2015 to pursue a PhD in philosophy at the University of Iowa. Here, she has made a name for herself as an outstanding scholar and teaching assistant. Undergraduate and graduate students alike look to her as a mentor and resource in teaching, research, and service. Brown’s pedagogy has left a clear impact on the nearly 500 students she has taught while on campus. 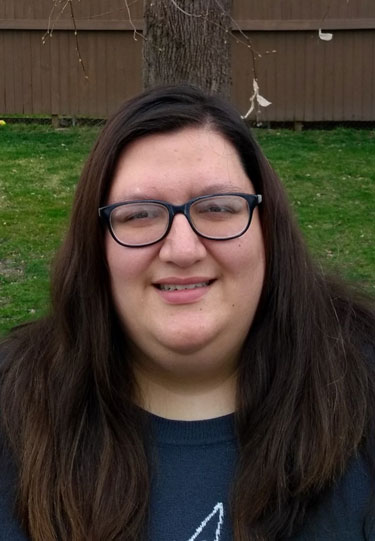 “A large number of students have dropped by my office in the last four years and told me that they will be majoring in philosophy and pursuing a career in social justice because of Laura,” says David Cunning, PhD, professor and chair of the Philosophy Department. “Laura made philosophy the most exciting and applicable subject matter that they had ever encountered. That is something.”

Brown’s efficacy in the classroom has not gone unnoticed. The UI’s Council on Teaching previously recognized her with an Outstanding Teaching Assistant Award. More recently, the Graduate College commended Brown by nominating her for the Midwestern Association of Graduate Schools (MAGS) Excellence in Teaching Award.

“Honored is the only word I can use to describe it,” Brown says of being nominated for the MAGS Award. “I’ve been able to meet a lot of people from different disciplines and I’ve seen them teach, so I know that the pool of teachers here is phenomenal. That makes it even more special. When your  dean reaches out to commend you for teaching, it’s just an incredible feeling.”

Despite her contributions within the Philosophy Department, Brown was initially unsure that practicing philosophy had the potential to effect change.

“One of my hesitations to go to graduate school in the first place was that I saw a lot of great work being done, but I didn’t feel the public was getting the research benefits from people in universities,” says Brown.

Brown began to approach philosophy through a lens of accessibility. As a recipient of the Obermann Center for Advanced Studies Fellowship and other awards, she had the opportunity to have discussions with people from a variety of disciplines about making the humanities more public facing. Her focus on sharing the knowledge she’s gained has also improved her teaching.

“I find that it’s mutually beneficial,” Brown says. “When I think about my work and the way that I can explain it without all the jargon to non-philosophers, it actually becomes much more coherent. I’m forced to think about how to explain this in a way that people of all levels can understand. It’s helped me become a better teacher, because I’ve realized that I have people of all levels in my classroom, and I need to have everyone in my classroom understand and master the topics.”

Brown has long been concerned about perceptions of philosophy as obscure or inaccessible. She sees accessibility as integral to her work as a teacher, and this often takes a creative turn in the classroom.

“One of the first things I’ve done in class is ask my students whether they think a hot dog is a sandwich,” Brown says. “Students will look at me in a really confused way, but immediately they have an opinion about this. It’s really not about the hot dogs and sandwiches, but about starting a dialogue—getting their opinions out there and getting them sharpened. People are disagreeing and interrogating the reasons that their peers had. My students are practicing philosophy, and that’s really cool.”

That said, class discussions are not always this comfortable. Brown recognizes that her classes can be difficult for students when they face challenges to long-held beliefs or struggle to understand new material. Brown saw an opportunity to improve her teaching by putting herself in her students’ shoes. Every year, she takes a class in something she has no experience with—to help broaden her knowledge base.

“Probably the craziest thing I did was join the swing dance class here at Iowa,” says Brown. “I felt really uncomfortable, but it was good to feel that way because many of my students feel that way in class.”

Brown views public outreach as an essential role of academia. She demonstrates this clearly as president of the Iowa Lyceum, a summer camp hosted by the department that promotes philosophy and critical thinking for high school students.

Feedback from students confirms the exciting program is reaching its intended goals. While some students report that the Lyceum has helped them with reasoning on tests, many more have disclosed that they are thinking about the world in entirely new ways or reevaluating long-held beliefs.

“As many people as we train in STEM and as many advances as we make with science and technology, that only really matters once we have a population that’s able to critically evaluate policies and accept those scientific advances,” says Brown. “I think that’s the role of philosophy. The earlier we can impart those skills to students, the better.”

Brown only has her dissertation left to finish, but her research and professional career is far from done. In the time that she has left working in tandem with the department, she plans to enhance opportunities for current and future students. After that, she has her sights set on a faculty position within the field. Considering Brown’s passion for both philosophy and teaching, it’s hard to imagine a better fit.