Dr. Stephen McMillan knows that the study of tiny things can have a major impact. McMillan, who earned his PhD in physics from the University of Iowa in 2020, is currently a postdoctoral scholar at the University of Konstanz, in Germany. What he described as a scientific curiosity beginning with “looking at books of Saturn and watching [physicist] Brian Greene talk about string theory in [the PBS series] Nova” ultimately morphed into a lifelong journey into quantum computing. 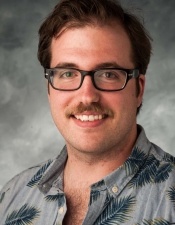 What, exactly, is quantum computing? As McMillan explained it, where a classical computer stores information via “bits,” basic units of information coded as 0s and 1s, a quantum computer employs quantum bits, or “qubits.” With a qubit, he clarified, “not only can it be a 0 or 1, but it can also be a combination of both. Like Schrodinger’s cat, where the cat is dead or alive until you measure it, a quantum bit can be a 0 and a 1 until you measure it. If you can work with it before you measure it, you can harness the power of it being both 0 and 1.”

What can you do with these qubits and their unique power? According to McMillan, one application is optimization. By harnessing what he described as “this quantum weirdness,” researchers can generate something called entanglement, which is essentially a non-classical correlation between two electrons’ spins. They can employ this entanglement with a quantum computer to perform algorithms at faster rates than a conventional, binary computer. While this line of research may sound—and is—theory heavy, McMillan appreciates how “you have one foot in reality at all times, because you can always think of applications. As a theorist, sometimes you get really far adrift from reality, so it’s nice to have that anchor.”

At the University of Iowa, McMillan was able to investigate spin coherence, one of two crucial ingredients for quantum computing. Typically, researchers studying spin coherence will use techniques that require exceptionally low temperatures, very high magnetic fields, radiation to add energy to the system, or complex optical devices to send photons into the system and measure them as they come out. Alternatively, the scheme that McMillan proposed while working at Iowa operates at room temperature and requires modest magnetic fields, no radiation, and no optical hardware. “That in itself could open up a lot of possibilities,” he shared. “You can imagine, these can be used as sensors. If you can probe the coherence, then any kind of fluctuation to the spin state [of electrons] can be interpreted somehow through a voltage or a current. You can imagine this principle working as a sensor on a space craft or something where you don’t want to have a lot of hardware.” He also sees potential applications in the clinical world, as researchers are even studying Alzheimer’s Disease using quantum sensors. “I think we’re making forward progress and there’s a lot of good that can be done with quantum technology,” he observed.

Commercial use is a natural application of quantum computing, and although the opportunities are currently limited, McMillan expects this will soon change. “The near-term goal for quantum computing would be to solve problems in, for instance, quantum chemistry or many-body physics [a category of physics concerning properties of microscopic systems], where actually doing the calculations on a classical computer just takes too much time and resources,” he explained. “In these cases, creating simulations on a quantum computer can make it a lot easier, and quantum computers can also handle optimization problems like organizing routes for deliveries really well.” Although he insisted that quantum computing won’t replace classical computing, “it’s definitely computing things in a different way, and it’ll have certain advantages.”

While enrolled in his master’s program at California State University, Fullerton, McMillan mainly worked with semiconductors. His advisor encouraged him to consider the University of Iowa, specifically Michael Flatté, confident that his group would be a great fit with McMillan’s interests. He was correct. “Most of my experience was filtered through the [Michael E. Flatté Research Group] itself, and I can’t say enough about the group. I look back on it probably as the best lifestyle. Maybe I could have made more money doing something else, but as far as the day to day, you wake up and do physics and talk to people about physics. It was really relaxed and very nice,” McMillan recalled.

Flatté’s mentorship in particular shaped McMillan’s graduate school experience. “My very first conference that I attended was for the American Physical Society, which is like a music festival for science. It’s kind of overwhelming, but every year, [Flatté] has a group dinner for everyone that’s been involved in the group,” he shared. During this dinner, Flatté gave a toast in which he explained that he “does it all for the students.” As McMillan explained, “As the years went on, it really rang true. I feel like he genuinely cared about my success and was probably as close to an academic parent that you could have in that sense. I felt like I could trust him by talking about my insecurities or issues I had, but I also trusted that he was working behind the scenes to promote the work that we did and to put me into positions where I could take advantage of it, if I was so inclined. It was fantastic.”

In fact, it was Flatté who encouraged McMillan to apply for the 2022 D.C. Spriestersbach Dissertation Prize, which he ultimately won. “For me personally, it’s really satisfying [to win this award] because you make a lot of sacrifices moving away from home and then dedicating the majority of your time to work,” he said. “To put that time and effort in, and then to receive some form of acknowledgment that you did an okay job, feels like a nice capstone to the whole experience. The thing that I’ve taught myself is that persistence pays off. With or without this award, the growth that you see if you stick to something long enough is worth the time.”