Imagining the Possibilities of Personalized Medicine

Fifth-year Biomedical Engineering PhD student Mallory Tollefson is imagining the possibilities of personalized medicine. And when she says personalized, she means it. She envisions a future where patients diagnosed as deaf would get their genomes sequenced so that she and other researchers could “identify variants that are unique to their genetics.” Then, she explains, “I would take those genetic variants and figure out which one or multiple ones are causing their deafness. And then with that data, we could potentially collaborate with people to design therapeutics to treat that deafness.” 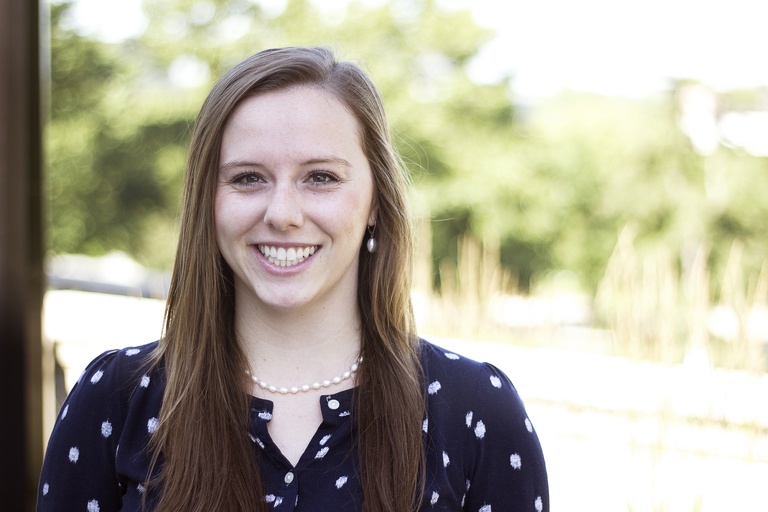 The first step toward this future is what Tollefson describes as “establishing a way to identify the pathogenicity of genetic variants,” or to put it more simply, “establishing the groundwork for a more personalized medicine impact.” Working in Professor Michael J. Schnieders’s engineering lab and collaborating with the Molecular Otolaryngology and Renal Research Laboratories at the University of Iowa, Tollefson is developing a series of protein simulations and refinements specific to proteins implicated in deafness.

A heterogeneic disease, deafness is caused by many genes and mutations within those genes, which can make it challenging to determine effective treatment paths for specific patients. Using 3-D models of proteins, Tollefson can track potential genetic changes from mutations and study how they impact how proteins fold, which in turn impacts how proteins function. Approximately 100,000 of over one million genetic variations in the Deafness Variation Database have been identified as benign or pathogenic so far, with the vast majority still deemed “variants of uncertain significance.” By designing simulations and testing them on the known variants, Tollefson hopes to eventually apply the models to the variants of uncertain significance to predict which ones might be implicated in deafness. Her current task is to determine whether such simulations can eventually be used to diagnose patients, with the ultimate goal of developing a better diagnosis system.

Why does an individualized explanation for deafness matter if a patient can be diagnosed without a deep dive into their DNA? As Tollefson explains it, “We don’t always know is which mutation is causing their deafness. The long-term dream would be that once we know their exact genetic cause of deafness, we can design a drug to treat that deafness. Obviously that’s a long way off, but before we can give treatments for a certain set of genetic mutations, we have to know which genes and mutations are causing the deafness.”

While her research is currently focused on deafness, Tollefson is excited by its myriad applications. “The simulations I’m working on are agnostic to disease,” she clarifies. “I’m developing a general approach that could be applied to vision loss, cancer genetics—it’s not specific to a type of protein. It’s a generic algorithm that could be used on any protein.” The possibilities are, to put it lightly, very exciting. “I enjoy this work a lot because while I have a huge appreciation for deafness, and while deafness is the most common sensory deficit in the entire world, I also really appreciate that I could have an impact on many other diseases. Someone could take the work I’m doing and apply it to any disease of interest that has a human protein behind that disease.”

As a female researcher in a male-dominated field, Tollefson is aware of the “significant underrepresentation” of women in computational biophysics and bioinformatics. This reality has made her even more eager to inspire future generations of researchers, especially women researchers, just as a high school teacher with an engineering background helped her recognize this career path as accessible and desirable. “I want to make sure that there’s a face like mine in this bioinformatics and computational biophysics field,” Tollefson explains. “That way, when other people are growing up, they see me as someone they could choose to mimic if they want to. It’s important to have that representation of people who look like you, doing what you want to do.”

People are certainly taking notice of Tollefson’s efforts and concerns for women’s representation in STEM. She was awarded a 2021-2022 American Dissertation Fellowship from the American Association of University Women (AAUW), a prestigious and competitive dissertation-completion grant. As she sees it though, “So many students and professors are guilty of thinking that these nationally competitive fellowships are just impossible to win. And they won’t even apply because they think that they’re not going to win.”

Speaking from experience, she recalls her initial rejection from the NSF Graduate Research Fellowships Program (GRFP). “I didn’t win the GRFP the first time I applied for it, and getting reviews was very helpful for my development as a writer and a scientist,” Tollefson explains. She clearly took their feedback to heart and was awarded the NSF GRFP upon reapplying the following year. Along the way, she had a revelation that “graduate school is not a 5K. It’s a marathon, and you have to pace yourself.” Her research and academic workloads are demanding, but she’s developed an appreciation for balancing her commitments for her own well-being.

Still, Tollefson insists, “Winning fellowships isn’t some unachievable goal. I’m just a normal regular student, and I just sought out the mentorship in order to win these fellowships.” That mentorship included Kelly Thornburg (Director of the Office of Scholar Development), Elizabeth Savelkoul (Graduate Fellowships Specialist), and her own Principal Investigator, each of whom helped her develop and strengthen her fellowship applications.

Reflecting on her own experience of winning the AAUW fellowship, Tollefson insists, “The thing that I want to see about this article is that it motivates other people to apply [to competitive external fellowships]. I want to see other students apply and other University of Iowa students win.” In that sense, she’s already acting as an inspiration and a representation of “people who look like you, doing what you want to do.”