Happy LGBTQ+ History Month! From October 1 to October 31, the United States celebrates the achievements and contributions of historic figures who fought for LGBTQ+ rights. This commemorative month is separate from Pride Month, which is celebrated every year during June. Although both months celebrate the LGBTQ+ community, they each focus on different aspects of the community's past, present, and future.

LGBTQ+ History Month was founded in 1994 by Missouri high school teacher Rodney Wilson, who wanted to give LGBTQ+ students the opportunity to learn more about the community and the work of historic icons to expand LGBTQ+ rights. Mr. Wilson chose the month of October because it coincides with National Coming Out Day, a day where many celebrate the self-disclosure of their gender identities and/or sexual orientations. while also acknowledging that many people still cannot do so in order to protect themselves.

The month of October was also chosen because the first march on Washington D.C. for LGBTQ+ rights occurred on October 14, 1979. During this rally, protestors demanded for five action points from the US government:

Supporters of LGBTQ+ rights continued marching over the years despite receiving little to no support from the federal government. Nevertheless, different states slowly began striking down homophobic regulations and passing new legislation that protects LGBTQ+ rights. Check out the timeline below to see some of the "firsts" and milestones in LGBTQ+ history:

1955: the first known lesbian rights organization is founded in San Francisco called The Daughters of Bilitis

1973: the American Psychological Association (APA) removes homosexuality from its list of disorders in the Diagnostic & Statistical Manual of Mental Disorders (DSM-II)

1982: Wisconsin becomes the first state to outlaw discrimination based on sexual orientation

2004: the first legal same-sex marriage in the U.S. takes place in Massachusetts

2006: the New Jersey Supreme Court rules that state lawmakers must provide the rights and benefits of marriage to LGBTQ+ couples

2020: The 4th Circuit Court of Appeals rules in favor of Gavin Grimm, stating that policies that segregate transgender students from their peers is unconstitutional

2021: the State Department announces that U.S. citizens can self-select between “M” and “F” on identification documents and are working on adding non-binary options

Here at the University of Iowa, Multicultural & International Student Support & Engagement (MISSE) will partner with various organizations to host a series of events throughout the next couple of weeks to celebrate LGBTQ+ History Month! Please see the graphic below for more details, or visit the Pride Alliance Center's (Pride House) social media on Instagram or Facebook, both at @uiowapridehouse. 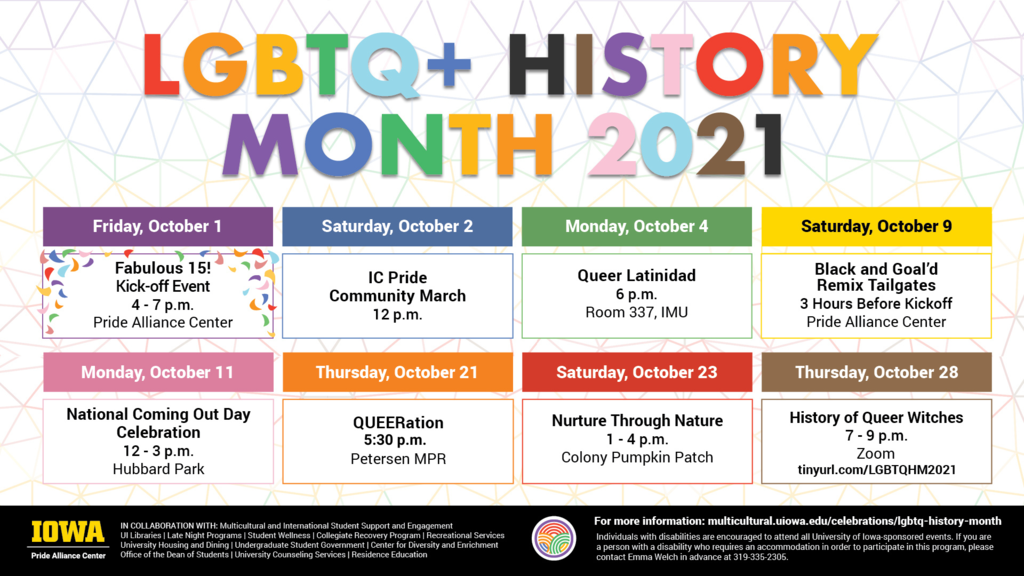