Kaelen Novak seemed to make a huge jump upon completing his bachelor’s degree in integrative biology and joining the University of Iowa’s MFA program in theatre arts. It turns out his educational trajectory has been full of many unexpected but meaningful pivots.

It was as an undergraduate that Novak first recognized his passion for art and theatre. Once immersed in his new plan of study, he began to fully appreciate the opportunity to follow his interests wherever they led and the freedom to pursue his passions and broaden his horizons.

As a master’s student, Novak has chosen to focus on costume and scenic design, but remains committed to studying a number of different forms of art. He credits faculty for encouraging him to gain practice in each area of art that catches his interest. 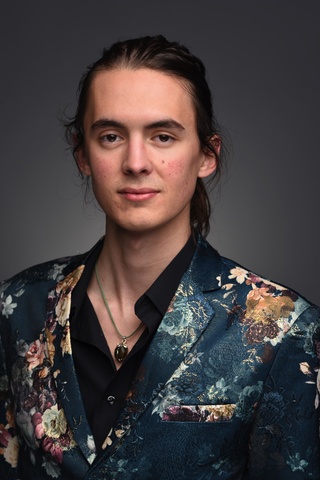 “What set Iowa apart when I applied was how open the faculty were to us exploring our own interests,” says Novak. “Even though I’m specializing in a graduate degree, I have the ability to explore more things than strictly what my focus is. The program faculty at Iowa are invested in helping me be creative in as many ways as I want to be.”

This freedom has allowed Novak to take on a handful of distinct projects. He accepted a position as costume designer for the show Effective – his first major costuming project – in the first semester of his graduate program. When the pandemic hit, Novak was tasked with converting the show to a virtual (Zoom) delivery format.

Novak also designed costumes for An Unsettled Body this past winter, which included creating several puritan-era dresses for the show from scratch. While these two major productions afforded him a great deal of experience in costume design, he credits his prior photography for helping him land the job as costume designer for An Unsettled Body. This again underscored for Novak the importance of gaining diverse experiences in his pursuit of the arts and humanities. It has also helped him recognize where his passion lies and what motivates him in the various creative arenas.

“I really enjoy taking unexpected ideas and turning them into some type of costume in my designs,” says Novak. “On the photography side of things, I love taking pictures of the small things that a lot of people tend to miss in the world – whether it’s because we buzz by them or they’re in places where we wouldn’t expect to find something cool. I like capturing things from a different angle or using whatever approach will bring out interesting effects in objects.”

Novak received an Iowa Arts Fellowship from the Graduate College his first year in the MFA program, which helped him explore different creative rolls from the get-go. In one recent experience, he delved into a new role as an art director for the installation show Blue Whale Variations, which was part of the Iowa New Play Festival of 2021. He also recently worked on the show I’m Writing to You Today – an interactive audio experience about LGBT+ people’s experiences in Iowa City – in which he compiled all the letters submitted for the show and created a tapestry out of them.

The Graduate College has also awarded Novak a 2021 MFA Summer Fellowship to research yet another new niche interest: virtual modeling and costume design. His project involves working to create 3D models of costume design for future projects within the theatre department. His resulting research will help designers construct virtual 3D costumes – and even characters themselves – for use in online shows. While the film industry has already developed this for movies and TV shows, Novak’s work will help make these programs more accessible to those working in theatre.

“There are some programs where I can design a costume virtually and then be given the patterns to make it physically,” says Novak. “Another benefit is the potential to create costumes that wouldn’t be possible physically. For example, if a character needed larger-than-life wings, we could design that virtually even when it would be nearly impossible in reality.”

Novak is excited to learn more about this software – on top of his many other pursuits – and wants to encourage others to follow their own curiosities. He says that by exploring areas that are slightly different or seemingly worlds apart, people can find interconnections that they wouldn’t otherwise notice. One of the main goals of his work is to promote this boundless curiosity in others so they can gain new perspectives with different approaches.

“I would like to continue helping others see that you don’t need to do just one thing – you can delve into all kinds of different things,” says Novak. “When you’re more open to exploring all these things that you might be interested in, it can help you find connections that others might not be able to and better appreciate each of them.”

Novak also embraces theatre’s switch to virtual formats for work and education over the past year. He believes that it has helped establish a connection for those who may not have had access to the arts, as well as a wider range of resources. Indeed, Novak is excited about what lies ahead in this emerging era of online art.

“So many people have started sharing their work on all these virtual platforms for the world to see,” says Novak. “It’s a great time to continue broadening your mind into things that you might not have been able to easily explore before. Everything is more accessible now – we’re in a time of opportunity.”