If you leave an ice cube outside on a hot summer day, it will melt, because that’s what solids do—they become more liquid with heat. Well, in some cases, the reverse can happen. There are polymers called poloxamers that, when heated, can actually transform from liquid to gel. 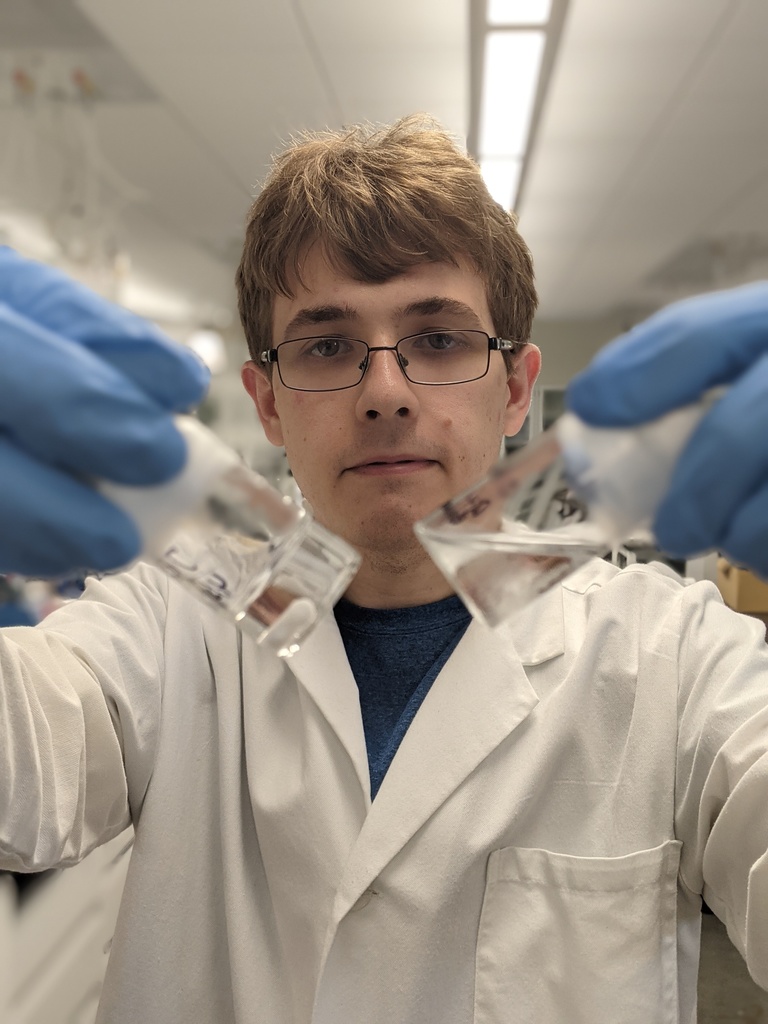 Fourth-year Pharmaceutics graduate student Jackson Russo sees these poloxamers as an opportunity to more effectively treat chronic wounds like bedsores and diabetic ulcers. Drugs for long-term pain relief are typically spread onto wound sites as gels or creams, but Jackson’s research investigates alternatives that would sidestep issues with this application, achieving prolonged relief as well as minimal contact with the wound site. “With a liquid,” Jackson explains, “you could in theory spray it onto the wound site or drop it on, in which case it will spread under its own gravity and coat the wound site. You would have to reapply less frequently and could deliver, for my specific project, pain relief directly within the wound site long term.”

Chronic wounds are especially complex given their combined pain mechanisms. “There’s pain from the immediate wound itself but there’s also pain from having long-term nerve hypersensitivity. If you’re missing a bunch of skin for a long time, eventually your nerve gets used to that and becomes hypersensitive, and that’s a different angle of pain relief than a typical wound pain, which is inflammatory in nature.” As a result, products that can treat this complex pain efficiently and effectively are in high demand. Jackson’s project is also exciting because it affords him the chance to work with a variety of techniques and instruments. He can investigate the gel’s performance, its stress response, how it actually delivers the drug, the drug’s behavior at the molecular level, and more. “The thing I like about this project is that it gives me the opportunity to work in all of these different areas and with all of these different techniques and to branch out into new areas of the field,” he shares.

Jackson became interested in the pharmaceutics field in high school, when he determined that his passion for chemistry could lend itself to a career that would, in his words, “make a positive impact. I thought if I could work in research and development sort of position, I could use my talent in a way that will help people without actually having to do a customer-facing stance. And I thought the best way to do that would be to apply into a pharmacy graduate program.” After earning an undergraduate degree in biochemistry, he did just that.

Jackson rotated through multiple labs during his first semester of graduate school before electing to join Dr. Nicole Brogden’s lab. He was attracted by the opportunity to work with poloxamers for two main reasons. The first is obvious: the notion of a liquid becoming a gel when heated is counterintuitive and therefore exciting. The pain-relief possibilities sealed the deal. “I feel like the pharmacy field has a responsibility to address with the way the opioid crisis has developed as of late,” Jackson says. “I felt like this project would do some small thing to address that and that it would be helpful in that way.”

Working in Dr. Brogden’s lab, Jackson has also enjoyed benefits like becoming adept at using new instruments and getting involved in a research project at “the ground level.” Although a visiting researcher completed some basic groundwork, Jackson found that “the project sort of grew around me.” Dr. Brogden’s mentorship style, defined by mutual trust and respect, has also allowed Jackson to flourish in his research. “I think having this autonomy is helpful in that it’s helping me to grow into a much better researcher, as opposed to just someone who is running the experiment,” he says. “I think that’s going to be useful going forward in being able to sort of design my own experiments and have my own ideas of how to do things.”

The project has also afforded Jackson the chance to indirectly study drug delivery through the skin, a rare opportunity. “Being exposed to knowledge about the skin I think is going to be really valuable for me going forward because it’s not really the most heavily explored area,” he explains. “It’s a subfield that a lot of people don’t really have experience with. In the future I’d like to work in the pharmaceutical field in any capacity and I feel like this lab has really prepared me with a diverse skill set to do that.”

Although the research is still in somewhat early stages, Jackson published his first co-authored paper at the start of 2021, which highlights the drug delivery and gel properties foundational to his project. Looking forward, he hopes to begin animal trials in fall 2021. A Ballard-Seashore fellowship recipient, Jackson is grateful for the dedicated research and dissertation-writing time that the funding facilitates.