University of Iowa graduate scholar David Smith recalls first becoming interested in the Norwegian language as a child when he learned of his family’s heritage. Although they did not speak it, he carried this interest through college and began studying Norwegian independently.

His path to professional translation since has taken him to graduate programs throughout the country and research opportunities across the world. 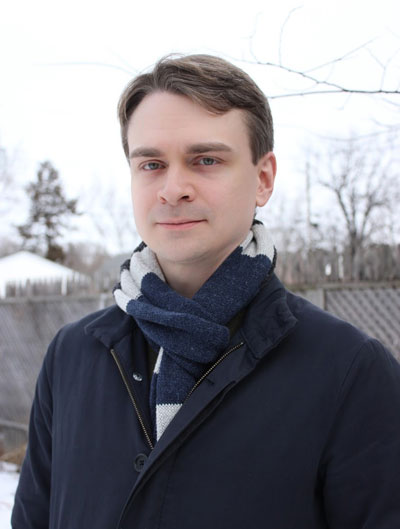 “I decided that what I really wanted to do was to go into literature, because that’s always been my passion,” says Smith. “I had read some great Norwegian authors whose work I wanted to possibly try my hand at translating.”

Smith began attending literary translation conferences and creating contacts within the field. This led him to a translating contract for one of Norwegian author Erling Sandmo’s books, Monstrous: Sea Monsters in Maps and Literature, 1491-1895. He also began to learn more about translation programs at these conferences, including Iowa’s Master of Fine Arts program in Literary Translation.

“I had already heard about the Iowa translation workshop when I met the director of the program, Aron Aji, at one of the translation conferences,” says Smith. “I learned more about the program and decided to apply, and it has been just a really great experience for me since.”

One aspect of the literary translation program is the thesis project, in which students must translate works into English. Smith selected Novel 1987 by Norwegian author Dag Solstad.

“Solstad has had several translations done with his work already, but these are mainly his books from the 1990s onward,” says Smith. “He has been writing since the 1960s, but few of his works from the sixties to the eighties have been translated thus far.”

Solstad’s early works are regarded as more political in nature. The author joined the Maoist movement in Norway during the 1970s and his writings during the time reflect this. While later writings have been translated into English, Smith places an emphasis on the importance of translating early Solstad works.

“Since his books from the nineties onward are the only ones available in English, English readers have a limited view of his authorship,” says Smith. “They need the earlier books to fill in the picture on Solstad.”

Smith conducted more research during his studies abroad in Norway, including meeting with Solstad and discussing his writings. Smith was granted the Stanley Award for International Research and the MFA Summer Fellowship Award in 2019, which enabled him to spend the summer studying in Norway and connecting with Norwegian authors.

Smith was also able to meet Guri Vesaas during his time abroad. Guri is the daughter of Tarjei Vesaas, another of Norway’s classic writers. Smith is currently contracted to translate a compilation of Tarjei Vesaas’s Selected Stories into English for publisher Archipelago Books. When Smith finishes the translations, it will provide English readers additional insight into Vesaas’s writings beyond current translated works.

“Many of Vesaas’s novels have been translated into English already, but not many of his short stories have been,” says Smith. “It would be good to have his stories in a unified collection for English readers to see how they complement his longer prose fiction and his novels.”

Tarjei passed away in 1970, but Smith was able to meet with Guri while studying in Norway and they discussed her father’s works. As a literary translator herself, Guri provided useful insight as Smith consulted her over some of the language in the texts.

In addition to these awards and his position as a graduate teaching assistant for rhetoric, Smith is grateful for the support of his fellow students and professors within the MFA program. He credits Aji and Jan Steyn as two key people who have assisted him throughout the program.

“Aron and Jan are both tireless supporters of students’ work here,” says Smith. “They have given me feedback on my translations, looked at my writings about translations, and reviewed my doctoral program applications. In so many ways, I feel like a better scholar because of them.”

They also provided insight for Smith’s critical introduction to his thesis, which covers the historical context of Solstad’s writings and the different translation choices he made when working through the text. Smith intends to continue focusing on Solstad as he pursues his PhD in Scandinavian Studies at the University of Wisconsin-Madison.

“My plans are to write about Dag Solstad and that period in Norwegian literature when many authors were Maoists in the far-left environment,” says Smith. “I think it is an important area to study and one that a lot more critical work could be done on. My time at Iowa gave me a very good grounding and a solid basis for continuing this work in my doctoral program at the University of Wisconsin-Madison.”