The University of Iowa Graduate College has a way of bringing people of various backgrounds together for a common cause. For proof, look no further than Sandia National Laboratories, where a multi-generational team of Hawkeyes combine their various disciplines in the name of chemical and biological security.

Based in Albuquerque, New Mexico, Sandia is a multi-mission, federally funded research and development center housing about 14,000 employees. One of the group’s missions is to support their international partners in improving their chemical and biological safety and security practices. This work has the overarching goal of helping to reduce the global threat of hazardous materials, pathogens, and infectious agents. 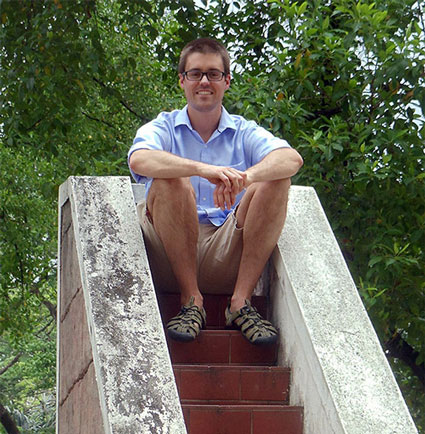 Andrew Nelson is one of an increasing number of University of Iowa Graduate College alumni to have joined Sandia in recent years. Having grown up in Oklahoma with both his parents in the profession of workplace safety sciences, Nelson jokes that he initially made attempts to avoid following in their footsteps.

However, Nelson gradually took to biochemistry while at the University of Colorado-Boulder, where his interest in environmental science, biochemistry, and cell signaling merged into a focus on environmental toxicology. Upon the rebirth of the Human Toxicology Program at Iowa, Nelson found the ideal, multi-faceted platform to expand his knowledge.

“That made it very appealing to me, that very collaborative, interdisciplinary nature of it,” he says.

Nelson was selected as a Presidential Graduate Research Fellow and earned his MPH in 2015 and PhD in 2016. That same year, he was drawn to the humanitarian efforts of Sandia. “It was essentially the very nice synthesis of international collaboration,” he explains. “Having a strong toxicology background is actually really helpful in understanding and developing risk assessment methodology for the eradication of chemical weapons.”

Upon joining Sandia, Nelson found himself in familiar company alongside Iowa alumna, Julie Wilder. Having earned her PhD in Microbiology at Iowa in 1990, Wilder has resided in Albuquerque since 1994. She did infectious disease research and trained graduate students in the University of New Mexico’s Biomedical Sciences Graduate Program before joining Sandia in 2015.

“Upon joining Sandia, I gave up the research portfolio of my career, basically, so I don't work in a laboratory anymore,” she explains. 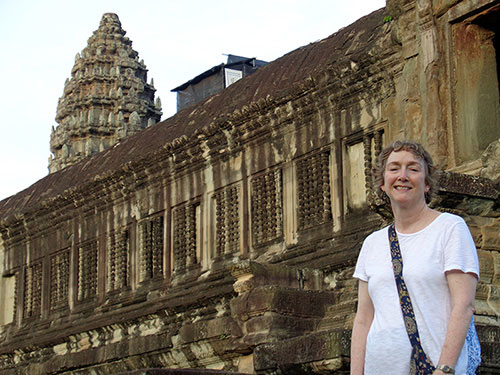 However, much like Nelson, Wilder now travels the globe helping labs in regions like Sub Saharan Africa, North Africa, and Southeast Asia understand the importance of keeping their biological material and equipment safe from being diverted, stolen, or misused by bad actors.

Wilder says, while safety is a relatively universal concept, the idea of biological and chemical security isn’t necessarily common throughout all labs around the world.

“In general, we are trusting people,” she cites of human nature, countering, however, that chemical and biological warfare have existed for centuries.

While the current COVID-19 pandemic has kept Sandia stationary, Wilder and Nelson have previously traveled together to various countries to provide laboratory mentorship.

“We would like people in Kenya, Malaysia, Tanzania, or Algeria to be able to train their own people in biosafety and biosecurity,” she explains, emphasizing the need for localized cultural and legal considerations. “It's a really good way to build capacity in a country.”

Nelson and Wilder would soon further round out their team of Iowa alumni with Nelson’s former lab cohort and recent graduate, Maurice “Mo” Payne.

Payne’s background saw him move from Chicago to Iowa City with his mother, an Iowa professor. He went on to study chemistry as an undergrad. 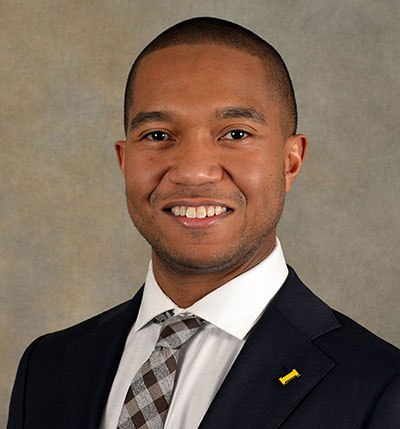 “Combined with the fact that I had seen the lifestyle of my mom, and the fact that I wanted to learn more about specific subjects, helped crystallize my path into graduate school,” he recalls.

Payne was awarded the Ludo Frevel Crystallography Scholarship in 2018, earned his PhD in chemistry in May 2019, and was recruited to Sandia by Nelson two months later. The pair now work primarily in chemical security, while Wilder focuses on microbiological security.

“He was just an outstanding candidate, and he’s been a very good fit for our group and mission,” Nelson cites.

“We do have some interaction and we obviously know that we're all Hawkeyes, and that is so important to us,” Wilder says of the team.

While still new at Sandia, Payne has been eagerly learning best practices to share with partner nations.

“You only learn that by being there and interacting with these folks in other countries,” Payne notes. “So, I'm looking forward to doing that, and developing some lasting relationships with people worldwide.”

One thing the Sandia trio agree on is the lasting impact Iowa made on their career paths.

“The State Hygienic Lab opened up many opportunities that I would not have had at other institutions,” Nelson recalls. “The lessons I learned in grad school—thoroughness, collaboration, literature, research, writing—those are the things that are constantly coming up in my daily life.”

“I would not be where I am now if I hadn't done one,” he insists.

Wilder concurs on the impact Iowa had in shaping her path.

“Being a graduate student at Iowa started my whole career; I've never left it,” she says, citing her 30 years of lab experience. “I never dreamed it would be possible to use my knowledge to travel around the world, work with amazing people, and feel like I'm making a difference with those people. It’s been a fabulous last four years, and I’m very glad to be here at Sandia and have that opportunity.”