As a doctoral candidate in physics, Lucas Beving has spent the last few years at Iowa researching plasma through simulations and theory. His efforts have paid off—he has now been given the chance to continue his studies at one of the nation’s most advanced plasma research facilities.

The United States Department of Energy’s (DOE) Office of Science Graduate Student Research (SCGSR) Program has granted Beving an award to conduct his dissertation research at one of its national laboratories this next year. He is one of just 62 graduate students selected from across the country in this round of solicitation. 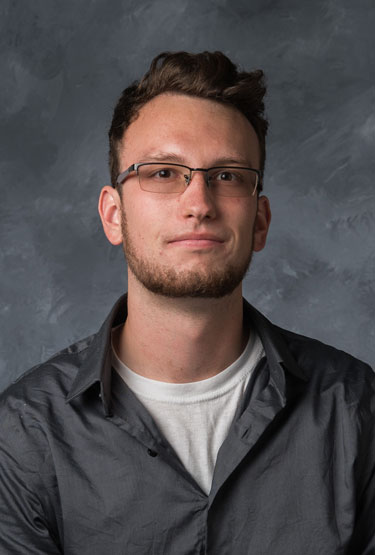 Beving’s research focuses on the behaviors of plasma, which has often been referred to as the fourth state of matter. While it shares some properties with gases, atoms in a plasma state can be charged and thus interact via electromagnetic forces over larger distances than the atoms in a normal gas. These forces allow plasma to have many more kinds of waves (like sound waves) than gases. Plasma can even create its own waves with these forces, such as light waves. Beving is interested in some of these waves that occur in experimental settings.

“Once you put plasma in a container, it has the ability to make a certain kind of wave near the edges,” says Beving. “That wave actually affects the temperature of the plasma. That’s an important thing to know for diagnostic experiments and research.”

This wave could alter the plasma’s temperature and density near the edges of the container. It could also create effects when measuring plasma from the center of the container. When scientists insert probes into the plasma, those probes act as walls. Because each probe is just another piece of metal that is effectively an extension of the container, probing the middle of the plasma can potentially create wave effects there, as well.

“When you try to measure a plasma like that, you could end up making these waves near your probe that actually change what you’re trying to measure,” says Beving. “The probe makes the middle of the plasma a bit more like the edge of the plasma, so you’re not quite measuring what you want it to.”

Understanding these potential effects is important for industrial uses like plasma etching, in which it is important to know surface properties of the plasma. Beving’s research will also provide useful information for general plasma experiments that fall under the SCGSR Program’s fusion energy sciences priority research area.

“The fusion reactors used for these plasma experiments have very large surface areas making up the container walls,” says Beving. “I can’t say with certainty that it would happen, but there’s a good possibility in certain situations that this effect would happen and it could lead to the energy from the plasma going somewhere unexpected.”

Beving views his research as contributing to the general knowledge about plasma physics. While information is available about the types of waves that can occur in plasma, he would like to provide more specialized information about these waves near its surfaces and boundaries.

Beving has conducted his research at Iowa under the guidance of his advisor, Scott Baalrud, PhD. He has also been consulting Matthew Hopkins, PhD, from Sandia National Laboratories in Albuquerque. Beving’s award from the DOE will allow him to continue his studies with Hopkins and other scientists at Sandia later this summer. These new research environments will undoubtedly enhance his studies.

“I think the biggest change when I get there will be being able to talk to Matt more often and talking to other research scientists who do similar experiments,” says Beving. “I’ve met a bunch of the other scientists there before and they all have different expertise that aligns well with this project. That will be a big benefit.”

Working at Sandia will make it easier for Beving to collaborate with others specializing in plasma research. It will also provide essential resources for his project. While Beving has been able to use some of Sandia’s computers and codes remotely in his work with Hopkins, he will have better access to the computer network and codes available at Sandia when working there in person.

“It’s going to be great for his research because it will give him more access and training to use the major software there as well as the high-performance computing, says Baalrud. “The type of simulations he is doing for his research require millions of central processing unit hours, so Sandia’s computers will be a great asset for his project.”

The resources and opportunities at labs like this are part of what makes the SCGSR Program awards so competitive. Beving was one of two students selected during this solicitation to conduct his research at Sandia. He is grateful for the support of his family and fellow graduate students in applying for the program and credits his advisor for guiding him through his research proposal.

“I had a lot of help from Dr. Baalrud,” says Beving. “You have to convince other experts in the field that your proposal is something worthwhile in just three pages, which is very short. That was tough, but he helped me focus on what was really important to say.”

The award means Beving will leave Iowa’s campus for a year and will take a hiatus from his classes as a teaching assistant. However, Baalrud is happy to see his student seize on such a great opportunity.

“It’s quite an honor to receive this award,” says Baalrud. “It is a testament to Lucas’ work ethic and his excellent progress in his research plan.”