Christie Vogler, a PhD candidate in anthropology, first traveled to Gangivecchio, Sicily, to study how ancient Greek colonizers interacted with the local population and constructed a unique culture. While excavating a villa, Vogler found hairpins, jewelry, and cosmetic items, all of which helped her to understand the life and identity of a wealthy, Roman woman living in the high Roman Empire period between the 1st and 3rd century A.D.

Unexpectedly finding new evidence of women playing important roles in ancient Rome, Vogler started to focus on the field of gender archaeology and gender studies, changing her original dissertation topic in its entirety.

“It spoke to me a lot more personally and I really became so much more passionate about my research,” Vogler says. “I could relate to it almost more on a personal level, in terms of, ‘all right, let’s talk about the women of ancient Rome who kind of get ignored,’ and that’s what’s really cool about archaeology.” 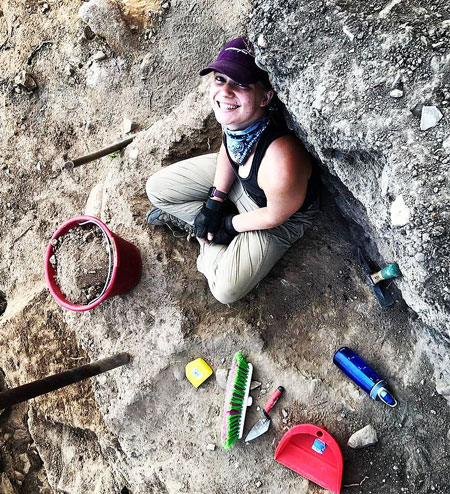 While on the island, Vogler also discovered medical tools that were closely linked to childbirth and female fertility symbols. These findings made Vogler speculate that another woman of a lower class also worked on the site as a doctor. Vogler’s hypothesis is that the female doctor could have been a slave working toward her freedom, or that she was already a free person.

“Which is much cooler to think about these networks of women working together, instead of just one random female individual,” she says. “Networks existed. Social currency existed. And we need to flush out the story a bit more.”

The flip side of asking questions about the unknown—inherent to the field of archaeology—is that sometimes you’ll never receive an answer. The list of written documents attributed to women during the Roman period is so minuscule, and while such sources likely existed, they have been lost over the centuries, according to Vogler.

“Women’s voices are so absent from this time period,” Vogler says. “But all the stuff they did in their daily lives is still buried in the archaeological record, and we can start to put together what the lives of women in the past looked like through the things they left behind.”

Vogler’s first experience sharing her research took the form of a 10-minute presentation in Gangivvico. Back on campus, Vogler learned that the Obermann Center for Advanced Studies was holding a humanities-based Three Minute Thesis (3MT) competition.

The purpose of 3MT is to give graduate students the opportunity to distill their research into a succinct three-minute presentation geared toward a wider, layperson audience. Vogler took home first place in the Obermann Center’s competition, automatically qualifying her for the Graduate College’s campus-wide competition.

“Winning the Obermann Center’s competition was really cool because my advisor, Professor (Glenn) Storey, was there, our former department chair (James Enloe) was there, and so were some of the students who’d gone to the field school,” Vogler says. “I had people invested in my work get to see how much effort I’ve been putting into it and how it’s paid off.”

Jennifer New, the Associate Director of the Obermann Center says that participation by humanities students in the Graduate College’s 3MT has grown since its inception six years ago.

“We were having a relatively low turnout rate with humanities students,” she says. “So, we thought having a humanities (competition) would get students interested in the whole concept of the Three Minute Thesis.”

Walking into the Graduate College 3MT, Vogler still felt nervous about her presentation. She was competing against eleven extremely talented graduate students who had made it to the final round. Once again, she prevailed.

“I think what’s interesting about the Three Minute Thesis is that you’re wanting to make a presentation where you’re giving them enough information to understand what you’re arguing,” she says. “But you really want them to ask you more questions at the end.”