Nicholas Borcherding has been selected as a Midwestern Association of Graduate Schools (MAGS) Distinguished Thesis Award winner for 2016. 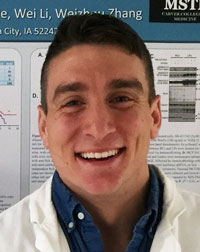 Borcherding, who earned his master’s degree in pathology at the University of Iowa in 2014, won the biological and life sciences category for his thesis, entitled “Non-Canonical WNT Signaling in Breast Cancer Initiation and Progression.” His project revealed a number of previously unknown functions for the WNT5A pathway in breast cancer, while identifying possible new targets for therapy.

“This level of productivity would be considered extraordinary for a Ph.D. student in cancer research, let alone an M.S. student who completed his program in two years,” says Weizhou Zhang, assistant professor of pathology in the Carver College of Medicine and Borcherding’s thesis advisor.

Borcherding was nominated for the MAGS Award after receiving the L.B. Sims Outstanding Master’s Thesis Award from the UI Graduate College.

“It’s an unexpected honor to receive the MAGS award,” Borcherding says. “I want to thank Weizhou Zhang, my mentor, and Tom Waldschmidt, my program director, for their excellent guidance. The award is as much a reflection of their excellent mentorship as my work.”