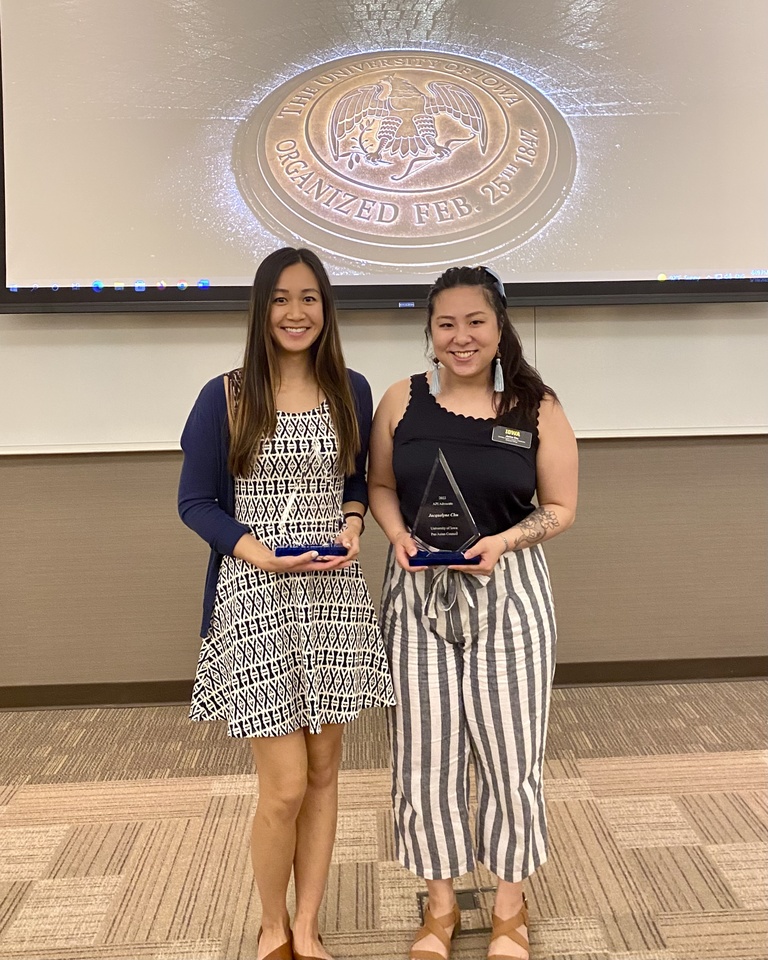 Ta and Chu are the new leadership team co-chairs for PAC, an organization that works to promote and improve the quality of life of individuals identifying as Asian, Asian American, Pacific Islander, Desi American, or under the Pan Asian umbrella. The council’s goals include addressing members’ diverse concerns and needs and acting as a formalized liaison between various University of Iowa communities.

Both Ta and Chu have participated in API advocacy efforts in various capacities during their time at Iowa. For Chu, that includes her involvement with various organizations as an undergraduate student. In her current role, she works with international student support and engagement, including hosting events that focus on community building and mental health topics. As she sees it, the award is an honor but “just the beginning of what needs to be done for API advocacy work.”

“Since joining the college in 2021, Chu has already become a recognized champion for diversity, equity, and inclusion across campus. Her new position on the PAC board and this recent accolade is well deserved,” said Associate Dean Shelly Campo, “I am confident that she will continue to play a significant role in DEI efforts on behalf of the college moving forward.”

Ta expressed similar excitement and awareness of the work to come, acknowledging that “it’s hard work to build a program, but it’s exciting to be recognized for the work we’ve put into it.”

Ta also received the 2021 Diversity Catalyst Seed Grant and matching Graduate College funds for an initiative to create mental health resources and professional development workshops for Asian-American and Pacific Islanders (AAPI) and Asian international graduate students and postdocs. Funds from the grant will be used to address specific challenges these students face as part of broader DEI efforts at Iowa. As Assistant Dean Jen Teitle said, both awards “highlight Ta’s specific efforts to create safe, engaging, and action-oriented spaces for Asian American and Pacific Islander students and postdocs at Iowa.”

Moving forward, both Chu and Ta are eager to bolster their involvement with PAC as the new co-chairs. As Chu described it, their primary goal is “establishing a firm foundation for the council” to ensure its sustainability, but she is also eager to continue expanding the group’s outreach to build its community. Ta agreed, explaining that they want to expand support for AAPI and Asian international graduate students, including using existing resources and connections “so the work benefits everyone in the community, even if it might be spearheaded by PAC.”