Juan Santana has been interested in science ever since middle school. Visiting his mom each day at work in a hospital clinic lab, he would see the myriad of applications and importance of research. That early interest developed into a passion as he seized opportunities to conduct his own groundbreaking research. Now, he wants to ensure others have the same opportunity.

Santana – an alumnus of the genetics PhD program – performed his studies in the lab of John Manak, an associate professor in the UI Department of Biology. The Manak Lab aligned with his research interests; it centered around using fruit flies as genetic models for studying various diseases. Santana’s primary project focused on studying Myb, a protein coding gene involved in the regulation of gene expression on which Dr. Manak had published several important papers in the field. 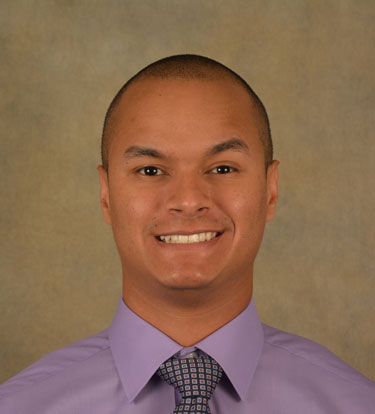 His research and lab work on Myb sheds new light on its functions in gene regulation. Santana’s dissertation – recently published in the esteemed journal Cell Reports – is the earliest such research to establish the gene as a regulator of genome-wide chromatin structure, with its loss having profound effects on gene transcription. This finding suggests that it plays an important role in determining which genes are activated or inactivated, which is independent of its known role in directly regulating gene transcription.

“We were able to demonstrate for the first time that Myb works as a global regulator of chromatin structure,” says Santana. “Basically, the DNA in the nucleus is compartmentalized into regions that are active or inactive. Genes in the active regions are expressed and making proteins, while genes in the inactive regions are repressed and not making any proteins. We were able to show that Myb actually binds to these boundaries separating the active and inactive regions and is crucial for stabilizing the repressed compartments so they remain repressed.”

His research demonstrates that Myb is important in keeping active and inactive DNA regions separated – in turn, ensuring activated genes are expressed and inactive genes are repressed. When a person has a deficiency in Myb, this could reduce the boundaries between the DNA regions, which would activate genes that are normally repressed. Irregularities such as this can result in genetic disease or abnormalities.

Santana explains that these findings could be helpful for doctors treating patients with cancer and other genetic diseases. By catching symptoms early on and sequencing a person’s genetics, scientists could better understand whether there is a genetic cause in each case. When sequencing does reveal Myb irregularities, doctors could target the gene for manipulation to reduce the expression of the other genes at fault. While he notes that it isn’t a cure for cancer or similar conditions, his research may be able to reduce the growth of damaging cells and be used as a treatment for genetic diseases.

After completing his doctoral degree at Iowa, Santana felt drawn back to the state to expand his research. He was attracted to the freedom and autonomy that comes with an academic post. When a research associate slot opened at the David Price Lab, he jumped on the opportunity to contribute to their investigations. His decision to join the team allowed him to continue his genetic research, while also providing access to additional lab tools such as CRISPR, a molecular tool used for editing genomes.

“The Price Lab has an incredible history of discoveries and conducting great science overall,” says Santana. “Some of the papers they published have essentially become law in the field for the many different things they’ve uncovered. It was clear when I applied that they were really interested in making important contributions to the field, while also ensuring their methods were robust and transparent.”

What stands out to Santana about the genetics program at Iowa is its focus on the process of recruiting prospective students. In partnering with local institutions and attending conferences for undergraduates in places like Puerto Rico, faculty and students from the program shed light on all the opportunities available on campus. As a clear role model for success within the program and a dedicated alumnus, Santana continues to generously volunteer his time and talent to help the program succeed.

“Juan was a wonderful student to have in the Genetics program because he is smart and hardworking, conducts excellent research, and has been a generous citizen of the program,” says Dan Eberl, director of the genetics doctoral program. “He has served as a program ambassador for several years. Even when he returns to Puerto Rico to visit his family, he will still sometimes combine that with an ambassador trip to some of the campuses there. We are very grateful for the extra time and effort Juan spends doing this.”

Santana is motivated by the thought of changing someone else’s life in the same way his was impacted from his time at Iowa. He is continuing his recruitment efforts to make those opportunities available to others following him.

“I think of myself as being very lucky in hearing about graduate school opportunities at the University of Iowa while attending an undergraduate science conference, so in the way that I can, I want to be that person for somebody else,” says Santana. “Every time I have the chance to jump into one of these recruitment trips, I do. It’s great to travel, but the main point is to have a positive impact on someone’s life – that same impact the person who recruited me had on my life.”