J Verniero earned the Hancher-Finkbine Medallion by just being themself.

A caring person by nature, J displayed leadership, learning, and loyalty while serving the campus community and beyond as a doctoral student in the Applied Mathematical and Computational Sciences Program. 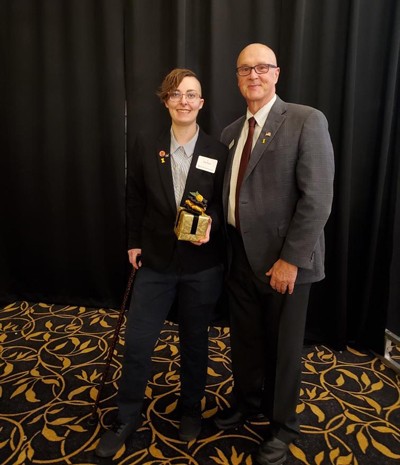 The Graduate College nominated Verniero for Hancher-Finkbine Medallion based on their series of notable achievements, including serving on the university’s Task Force 2020 and publishing two first-author research papers in a prominent journal. J received the award at the 2019 Finkbine Dinner on April 23 at the Iowa Memorial Union.

“It is weird getting this award, because I feel like I was doing what I was supposed to do,” J says. “It was very humbling going to this dinner with all the people there for me and the other award winners. I am so appreciative. I just don’t know how to express it.”

Coming to a major research university from a small liberal arts college wasn’t an easy transition for Verniero. J definitely felt like an imposter.

After earning their doctorate on May 10, however, this native of Annandale, N.J., isn’t leaving the UI feeling that way. J is fascinated by the impact they have made at the University of Iowa.

Verniero credits Graduate College Dean John Keller for being one of the key people who helped them succeed at a Big Ten university.

“John Keller was really instrumental in helping me feel welcome here. He was one of the first people who cared about me as a person at this university,” Verniero says.

J worked with Dean Keller as an appointed student representative on the university’s think-tank effort called Task Force 2020. Members of the task force were charged with re-envisioning the UI.

Serving on the task force was essential in giving J an increased sense of belonging on campus.

“(The task force) gave me somewhere to put my creative energy and my caring about people. It helped me balance these two parts of myself,” says Verniero, who also spent two years on Graduate Council. “It was remarkable to talk to other people. They all respected me like I was an equal, which really touched me.”

“I was so amazed and proud of the community coming out and speaking about what they thought,” J says. “I was impressed by the number of young people who were involved. This town is so connected to the university. The University has a responsibility to connect back with the community.”

“That day was amazing. I got to learn how much work goes into a day-long workshop,” J says. “I helped write grant for the workshop and we got the most money ever received for this grant. It’s powerful to write a grant for someone else.” 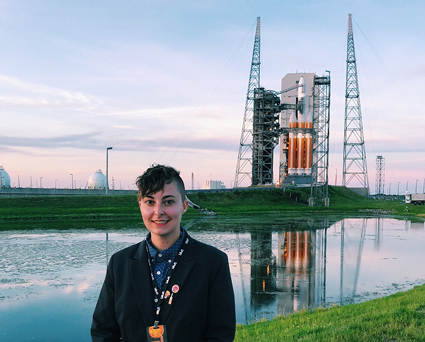 Verniero has developed an algorithm that could be implemented onboard a spacecraft to calculate how turbulent energy gets dissipated. Turbulent energy, when dissipated, can energize particles or turn into plasma heat.

“If you can predict where turbulent energy is going, you can better understand fundamental processes that occur in space, such as harmful plasma originating from the sun that could cause massive blackouts on Earth,” says Verniero, who had two first-author papers published in the Journal of Plasma Physics while a graduate student at the UI.

J’s research will continue as a postdoc at the University of California Berkeley Space Sciences Laboratory. They will analyze data from NASA’s most recent mission to the sun, Parker Solar Probe. J will look for evidence of wave-particle interactions and help develop instrumentation for diagnosing signatures of turbulent energy dissipation onboard spacecraft, possibly improving scientific data return by downlinking post-processed data to the ground.

Last May, J suffered a debilitating boulder climbing accident in Santa Barbara, Calif., tearing the ACL and meniscus in both knees. Despite being confined to a wheelchair for months, J kept moving forward in their pursuit of a Ph.D., while affecting campus change at the same time.

J was an advocate for graduate student rights at Iowa. They organized a seminar with University Counseling Services to de-stigmatize mental health and educate first-year students on imposter syndrome.

Because of Verniero’s actions, someone in a wheelchair or on crutches can use the bathroom independently at Van Allen Hall thanks to newly-installed automatic doors.

“I didn’t let pain set me back,” J says. “I was super determined to graduate on time. I wouldn’t let this get in my way. Every day, even if I was in excruciating pain, I would force myself to read at least one paper to make my mind active.”