Through the years, Christopher Merrill has written dozens of recommendation letters for colleagues seeking a prestigious Guggenheim Fellowship. Until this year, he had never applied himself.

On the urging of one of his recommenders, Merrill, a poet, essayist, journalist, and translator, threw his literary hat in the ring. 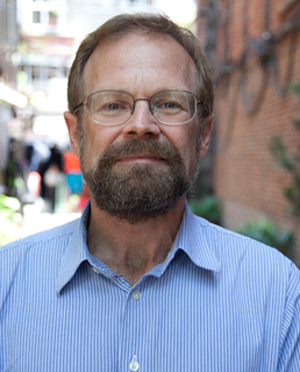 Merrill, director of the University of Iowa’s International Writing Program, was one of 168 winners of the John Simon Guggenheim Memorial Foundation’s 2019 fellowships. The recipients, announced April 10, were chosen from a group of almost 3,000 applicants.

“This fellowship is for my work as a writer, so it means the world for me. I’m absolutely thrilled,” says Merrill, who was recognized in the general nonfiction category.

The fellowships provide between 6 to 12 months of funding for artists, scholars, and writers to pursue creative projects. Merrill will receive 12 months of funding, starting in June 2019, to support a book project that’s dear to his heart: The Trials of Roger Williams: A Biography. The book will be published by W.W. Norton & Company, Inc.

Roger Williams was a 17th century Puritan minister who was an advocate for religious freedom, separation of church and state, and fair dealings with American Indians as well as the founder of the Colony of Rhode Island.

“I’m hoping this is a book that builds on what I did in Self-Portrait with Dogwood, which was a lot about my life in this country,” Merrill says. “This new book goes back to the beginning of my family’s time in the New World, because I learned that Roger Williams was our first ancestor in the New World about 10 years ago. The more I read about him, the more I thought this was a book I wanted to write.”

Eight other winners of a 2019 Guggenheim Fellowship have University of Iowa connections, including:

Machado and McCrae were Dean’s Graduate Research Fellows while students at the UI. Klink was born in Iowa City.

“(Having nine winners with UI connections) suggests a certain kind of vitality here at the University, which has been the case since the very beginning of the Writers’ Workshop and continues through all the different writing programs here,” Merrill says.

This year’s fellowship recipients come from 49 scholarly disciplines and artistic fields, 75 academic institutions, 28 states and the District of Columbia, and two Canadian provinces.
Since its establishment in 1925, the John Simon Guggenheim Memorial Foundation has granted more than $360 million in fellowships to over 18,000 individuals.