Brady Krien has been recognized for making exceptional contributions in the classroom and beyond with the 2019 Midwestern Association of Graduate Schools (MAGS) Excellence in Teaching Award.

Krien is a Ph.D. candidate in English at the University of Iowa. The native of Lake Geneva, Wis., was nominated for the award by the UI after receiving the Council on Teaching’s Outstanding Teaching Assistant Award for the 2017-18 academic year. 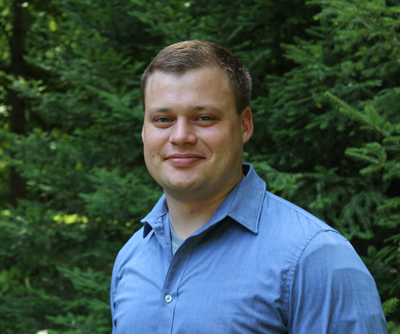 The MAGS Excellence in Teaching Award recognizes the importance of excellence in teaching and mentoring as a component of graduate education and the preparation of graduate students for future service as college and university faculty.

One award is given to a doctoral student and one to a master’s student annually. Krien is the UI’s first recipient of this award, which was first presented in 2011.

“It’s nice to be recognized for my teaching by an outside organization,” Krien says. “It’s reassuring to have an emphasis placed on graduate teaching as being important as it develops skills that are really essential for graduate students. It’s also good to know that the teaching of graduate students is valued beyond this university.”

Krien will be honored during an awards luncheon on March 21 at MAGS’ 75th annual meeting in St. Louis, Mo. MAGS is an affiliate of the Council of Graduate Schools and its member states include: Illinois, Indiana, Iowa, Kansas, Kentucky, Michigan, Minnesota, Missouri, Nebraska, North Dakota, Ohio, Oklahoma, South Dakota, and Wisconsin.

Krien taught four undergraduate courses in the Department of Rhetoric covering reading, writing, and speaking in addition to his work in the University Writing Center. He was the instructor of record in his classes, meaning he constructed his own lesson plans and designed his students’ assignments.

“I taught small class sizes of about 20 students, so I got to know the students really well,” says Krien, who received the Doug Trank Memorial Teacher Award from the Department of Rhetoric in 2018. “I got to interact with the students at a crucial point as so many were first-year students. I get to build relationships with them in really productive ways.”

Since there are no rhetoric majors on campus, course instructors focus on giving their students the transferable skills of writing and speaking as they move forward in their careers.

At the same time, Krien improved his own writing—a critical skill as he begins composing his dissertation in the coming months.

“The process of helping students find their own writing voices, starting with teaching research, developing arguments, and going through the research process itself has helped my own understanding of writing,” Krien says.

Krien’s excellence as a teacher spread to Iowa’s Center for Teaching as a graduate fellow. In this role, he led two large workshops for his teaching assistant peers focusing on active learning for students and cyber-citation.

In addition, Krien became the second student on the Iowa campus to complete a Teaching-as-Research project through the Center for the Integration of Research, Teaching, and Learning (CIRTL). This involved planning, developing, and executing a small scale educational research project. Krien’s project focused on using Strengths Finder to incorporate deliberate practice into writing instruction.

The success of his project led to his selection as a CIRTL peer mentor, where he helped guide the next cohort of CIRTL students through the process of planning their own Teaching-as-Research projects.
Currently, Krien is a professional development and fellowship advisor at the Graduate College. In this role, he serves a peer mentor to graduate students in the arts and humanities.

“Brady is an exceptional teacher, one whose skills have extended far beyond the walls of the traditional classroom,” says John Keller, Dean of the Graduate College and Associate Provost for Graduate and Professional Education. “For us at Iowa, Brady’s creativity and people skills have led to him becoming a resource for undergraduates, graduate students, and faculty.”