Emily Kroska has a strong interest in Acceptance and Commitment Therapy (ACT), which is based on a person’s acceptance, rather than avoidance, of painful emotions and experiences. Therapists help people commit to living a life, which values who and what matters most to them. 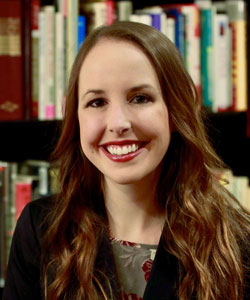 Typically, psychological interventions, such as ACT, are administered over the course of 12 to 16 weeks. Many patients, however, struggle with the time and expense associated with the weekly sessions as well as with finding well-trained therapists.

Kroska, who earned her Ph.D. in psychology at the University of Iowa in 2018, sought solutions to these challenges in her dissertation titled, “How much is enough in brief Acceptance and Commitment Therapy?” She evaluated the effectiveness of ACT when it’s delivered in a group setting in a single day, and determined that a brief intervention for people with depressive symptoms is a successful form of treatment.

The Graduate College awarded Kroska with the D.C. Spriestersbach Dissertation Prize in Social Sciences. She will be honored during a ceremony at the James F. Jakobsen Graduate Conference in March 2019.

Kroska provided therapy for 139 participants who were experiencing symptoms of depression. She placed participants in one of three conditions: a six-hour ACT group, a three-hour ACT group, and a 90-minute ACT group. During the treatment sessions, four UI upper-level graduate student therapists, selected and trained by Kroska, helped participants approach their thoughts and emotions instead of running from them via avoidance (e.g. drugs, alcohol, sleep, distraction).

Participants were asked how they would want friends and family to describe them in three words or less in an effort to help individuals connect with what matters most. They also were encouraged to examine whether or not avoiding the painful experiences was a long-term solution or simply provided short-term relief.

“Those kind of questions really strike people and force them to look at the discrepancy between who they are now and who they want to be,” says Kroska, who is now a postdoctoral fellow at the University of Wisconsin in Madison. “That can be painful, but it is allowed by the person who is extremely motivated to make a change. Once we can face those things and focus on the way we want to live our lives and recognize the things that are most important to us, then that shifts the focus.”

Kroska evaluated study participants at pre-treatment and after one and three months post-intervention. She determined that the one-month time frame was long enough to notice changes in the level of depression symptoms, and at the three-month time frame, depressive symptoms were similar to many treatment trials that end after 12 weeks.

Participants were significantly less depressed at both follow-up points and showed significant gains in ACT-related processes (i.e., avoidance of issues, mindfulness). Interestingly, the three interventions (six hours, three hours, and 90 minutes) did not differ with respect to their effectiveness, suggesting that even very brief intervals of group ACT, when delivered in one day by well-trained therapists, can have a significant impact on depressive symptoms.

“In group therapy, it was remarkable that people could connect. They would have very different paths in life but very similar experiences,” Kroska says.
These findings could have great public health significance because of the opportunity to offer convenient low cost services for individuals who might not have other treatment options.

“The goal of ACT isn’t to get rid of all of your problems. It’s not to eliminate depression or anxiety,” Kroska says. “The goal is help you live a meaningful life even in the presence of difficult emotions or difficult experiences. We don’t have to eliminate people’s symptoms entirely as long as they have something to live for.”