Awkward pauses on first dates seem never-ending. While uncomfortable, these experiences illustrate that a sense of time is fundamental to one’s life experiences. However, little is understood about how the brain creates the representation of time.

Benjamin De Corte, a Ph.D. candidate in the Neuroscience Interdisciplinary Graduate Program, is studying how individuals cognitively perceive the passage of time.

“I can’t stick out a bucket and collect pellets of time falling from the sky,” DeCorte says. “The brain has to get really creative in generating the sense of something we can’t perceive in any sort of direct sense. How the brain does that is a really complicated question.” 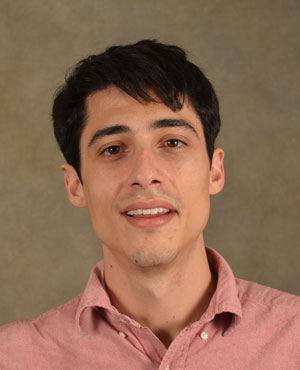 De Corte’s search for answers to that question will be funded by a prestigious National Research Service Award from the National Institutes of Health. The native of New Orleans, La., will investigate the neural circuits that underlie cognitive dysfunction, as it relates to the perception of time, in Parkinson’s disease.

Most researchers are in agreement that the striatum, located in the forebrain, helps humans track time. Dopamine, a chemical messenger that carries signals between brain cells, controls striatum activity. Prior work indicates that when striatal dopamine is depleted in Parkinson’s disease, timing impairments emerge.

De Corte intends to study how striatal dopamine mediates cognitive function in mice. His experiments will use a timing task referred to as the peak-interval procedure. During this task, mice will be presented with a cue that that indicates they should start responding (e.g. press a lever) just before and stop responding just after a certain interval of time has elapsed (e.g. six seconds).

De Corte is finding that when he blocks striatal dopamine receptors—mirroring what happens when striatal dopamine is lacking in patients with Parkinson’s disease—it impacts how mice decide to start and stop responding based on time. He will further explore this effect throughout his study supported by the award.

These experiments will increase the understanding of connections between striatum and cognitive deficits of time perception in patients with Parkinson’s disease. These results also could help in the development of new therapies to treat cognitive impairments in this disease.

“Ben’s study of neurons that express dopamine receptors is of great interest in diseases such as Parkinson's disease,” says Nandakumar Narayanan, assistant professor of neurology and De Corte’s advisor. “His work could have far-reaching implications in how we understand these neuronal circuits, which is key for new therapies.”