John Eicher grew up in Berne, Ind., a city settled by Mennonite immigrants who fled religious persecution in Switzerland in the 1850s. A Mennonite himself, Eicher discovered that the congregation promoted themselves as Americans during the Temperance Movement in the 1900s, downplayed their German-speaking heritage during World War I, and after World War II, redefined themselves as Swiss.

This switching of national labels inspired Eicher to trace the migration of German-speaking Mennonites from both the Soviet Union and Canada to Paraguay in his Ph.D. dissertation at the University of Iowa. 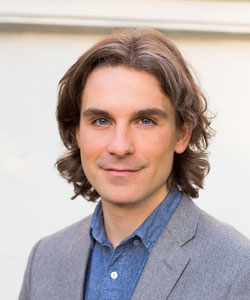 Eicher’s dissertation, titled “Now Too Much for Us: German and Mennonite Transnationalisms, 1874-1944” argues that these scattered groups changed their national labels in order to be exempt from military service, to collect their own taxes, and to be under an early-modern, or monarchical form of the government. At the same time, governments used these groups to promote their own mythologies about national expansion and national solidarity.

The Graduate College awarded Eicher with the D.C. Spriestersbach Dissertation Prize in the humanities and fine arts category. Eicher, who earned his Ph.D. in history in 2015, will be honored during a ceremony at the James F. Jakobsen Graduate Conference in March 2018.

Eicher contends that governments and aid organizations in Europe and the Americas portrayed Mennonites as enemies or heroes for the purpose of their own economic development and to have strong, hard-working “Germans” settle the frontier.

The first chapter of Eicher’s dissertation traces the movement of Mennonite voluntary migrants from Russia to Canada to Paraguay from 1870 to 1926.

“Governments wanted to achieve an efficient way to colonize the prairies,” says Eicher, an assistant professor of history at Penn State University Altoona. “They gave Mennonites reserves of land with the understanding they would eventually self-identify as Canadian.”

Mennonites, however, thought they could do what they wanted with the land, leveraging their assets to set up roads and other projects. This caused the Russian and Canadian governments to shift their view of the Mennonite settlers from nation-building partners to anti-national dissidents.

Eicher later chronicles the movement of thousands of Mennonite refugees from Russia to Germany in 1929, and then from Germany to South America in 1930.

The Soviet, German, and Canadian governments as well as aid agencies in Germany and North America considered the Mennonite migration to be a refugee problem. Eicher, however, contends that this “problem” gave each government and aid organization an opportunity to assign broader meanings to the refugees and define their own constituencies along the lines of class, nationality, or religion.

“Up to about 150 years ago, most Europeans were identified primarily by their family, their professions, and region of their country,” Eicher says. “Only until recently did people become defined by nationalism.”

It is said that history repeats itself, and the refugee problem is no different.

According to the Migration Policy Institute, Europe is facing its worst refugee crisis since World War II, with more than 1 million people applying for asylum in 2015 and again in 2016.

“What’s important to remember about these people—Syrian and Pakistani refugees—is that they possess multiple national and religious identifications, just like the Mennonite settlers,” Eicher says. “We have to understand stories people have about themselves and how they may change over time.”