Cystic fibrosis (CF) is a genetic disease characterized by recurring bacterial lung infections. Even with antibiotics and other forms of treatment, people with the disease have a life expectancy of only 37.5 years. 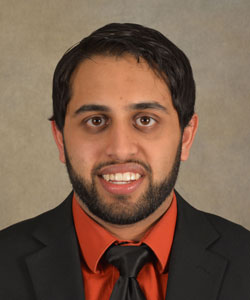 As an MD/PhD student at the University of Iowa, Viral Shah looked for answers about why people with cystic fibrosis are prone to chronic and potentially deadly respiratory infections.

The Graduate College awarded Shah with the D.C. Spriestersbach Dissertation Prize in the Biological and Life Sciences category for his dissertation titled, “Mechanisms of Acid and Base Secretion: Implications for Airway Host Defense in Cystic Fibrosis.” Shah, who earned his Ph.D. in molecular physiology and biophysics in 2017, will be honored during a ceremony at the James F. Jakobsen Graduate Conference in March 2018.

Shah’s dissertation compared airway physiology between three species—human, mouse, and pig. He examined why mouse models of CF do not develop respiratory infections. He also studied why, conversely, the airway surface liquid (ASL) lining of pig and human lungs is more acidic and unable to kill bacteria that causes infections.

By understanding how mouse airways differ from those of humans and pigs, doctors may be able to develop new therapies for people with CF.

Shah, who is a first-year resident in the Department of Medicine at Massachusetts General Hospital, reasoned that mice might lack proton pumps, proteins which in humans and pigs promote acidification of the airway surface liquid, resulting in bacterial infections.

To test this hypothesis, Shah inhibited ATP12A, a proton pump expressed in the lungs of humans and pigs, but not mice, to make airway surface liquid in pigs less acidic.

Taking his research a step further, Shah caused CF mice to develop respiratory infection, just like humans and pigs. He injected a virus containing ATP12A to the mouse lungs, and found that the CF mice then showed all the characteristics of CF in humans: acidic ASL, reduced bacterial killing, and signs of inflammation.

“It has long been puzzling why mice with a disrupted CFTR gene have intact airway host defenses, and it was hoped that understanding the reason might suggest a therapeutic strategy. Viral’s data provided an explanation,” says Michael Welsh, Roy J. Carver Chair in Internal Medicine and Molecular Physiology and Biophysics and Shah’s dissertation advisor.

This part of Shah’s dissertation was published in the prestigious journal Science in January, 2016.

“By finding ways to inhibit ATP12A with drugs, we might now prevent the devastating complications of CF that include extensive lung damage and inability to breathe,” says Amy Lee, professor of molecular physiology and biophysics and member of Shah’s thesis committee.