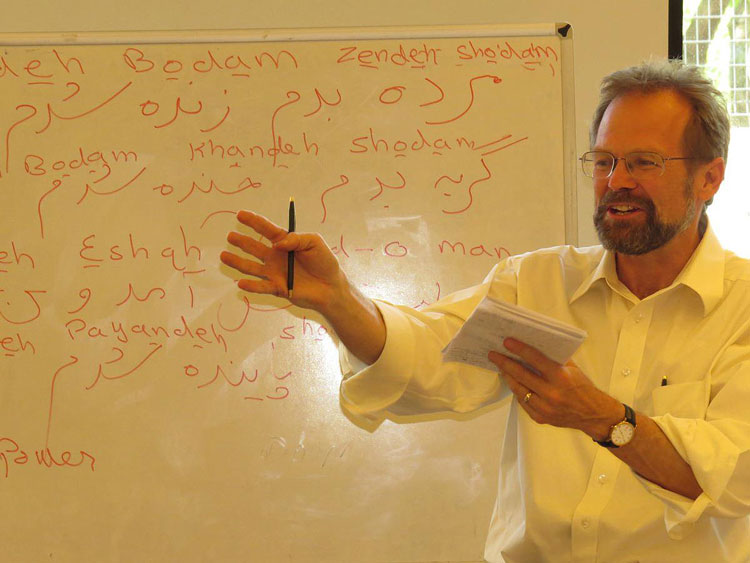 Christopher Merrill likes to say that in his job he has a chance every hour to realize how little he knows about the world.

As director of the International Writing Program (IWP), Merrill welcomes 30 to 35 of the world’s emerging and established writers to the University of Iowa each fall to participate in the Fall Residency Program, where writers enhance their literary talents and share stories of their homelands through the written and spoken word.

“Over the last 50 years, the International Writing Program has made the world feel smaller and much more interesting,” Merrill says. “We have brought more than 1,400 writers from 150 countries to Iowa City. These writers in their various ways have introduced us to their literary traditions we know nothing about. That’s what makes this unique program in the world of letters so fascinating.

“Day by day, we have poets, fiction writers, essayists, playwrights, and screen writers reminding us how complex the world is.”

From October 8-15, coinciding with the Iowa City Book Festival, the IWP will hold its 50th anniversary celebration. The program, started in 1967, will bring back to Iowa City a number of their distinguished alumni to participate in readings and panels about the changes to national literary landscapes, the impact of the IWP on different regions of the world, and the future of literary genres.

“We have the chance in this small town to bring together writers from so many places who remind us that the world is a much more mysterious place than we imagine,” Merrill says.

Over the course of the 12-week Fall Residency, in addition to working on their own projects, writers give readings and lectures about their work and cultures, collaborate with artists from other genres and art forms, and travel and interact with American audiences and literary communities across the United States. 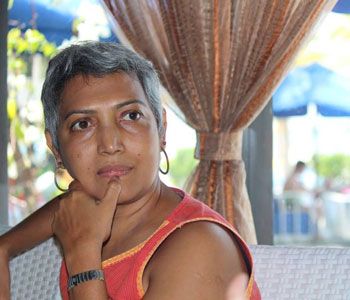 Ameena Hussein, a novelist from Sri Lanka, had never experienced anything like the IWP before traveling to Iowa City in 2005 as a visiting writer.

“I began to think more about my writing and to aspire to write better as a result of this program,” Hussein says. “In subsequent years, IWP also gave me a chance to visit Greece and the Maldives, where together with other creatives from other parts of the world, we discussed issues that were relevant and timely in these unique settings, which combine history, culture, the environment, and the fact that we all belong to the global village.”

As part of the IWP family, Hussein is friends with writers from Syria, Libya, Japan, and Kazakshatan.
“I am part of a larger world—the world of creatives that transcend nationality, faith, and politics,” Hussein says.

Yvonne Owuor, a novelist  from Kenya, credits IWP for reconnecting her with the soul of storytelling.

“IWP complicated my notion of state and nation and home,” Owuor says. “It expanded my soul and imagination to understand that country is bigger than the geographical space into which one was born. It imbued me with a new restlessness, an inability to be complacent and contented with the comfortable and familiar things of belonging.”

For the first 35 years of the IWP, the world came to Iowa.

That all changed with the terrorist attacks of September 11, 2001. That dark day in American history caused cultural diplomacy at the U.S. State Department to be redefined. IWP played a key role in that process. 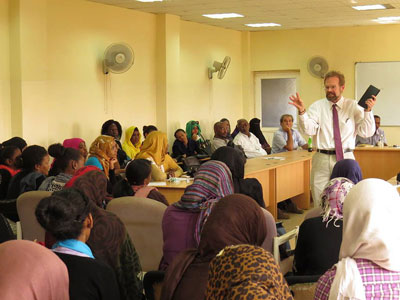 “After 9/11, we started to think of cultural diplomacy as a two-way exchange,” Merrill says. “Every fall, writers from around the world come here. Now, we also take writers out to places of strategic interest.

We opened up the world to writing, to the magic of Iowa City, to our distance learning programs.”

Earlier this year, Merrill gave a lecture with a question-and-answer session for students at the International University of Moscow. Merrill says these students were quite interested in how the United States teaches creative writing and what American literature is all about.

“I am quite proud of our role in helping heal the wounds of war through some small creative action,” Merrill says. “It allows writers in Baghdad to be in touch with all these creative writers from UNESCO cities of literature around the world.

“In cultural diplomacy, we’re trying to share our enthusiasm, our curiosity, and our ideas about writing.”

Merrill, a poet, essayist, journalist, and translator, has directed the International Writing Program since 2000. His impact is felt locally in Iowa City—a UNESCO City of Literature—and all over the world.
Owuor credits Merrill for taking a risk on her, a stranger starting out in the world of writing.

“Chris Merrill has been a version of the three witches of Macbeth for me; invoker of literary destiny, a presence at the back of my creating mind that is a lightning rod,” Owuor says. “He provides the assurance to continue even when the literary realms and landscapes become filled with uncertainties. Without him, I would not be writing with the abandonment I do now. I would not have known that it is OK to toss the illusion of certainties into the air and trust the unknown.”

Simply put, he is an inspiration in the world of writing.

“He is the captain of the IWP ship that he steers so deftly,” Hussein says. “He is someone who is constantly enthusiastic about all he does and who is completely engaged with people in a meaningful way.”