You can’t do outreach on evolution and climate change here. Those topics are too hot to handle.

Emily Schoerning, director of research at the National Center for Science Education (NCSE), heard those words over and over again as she began organizing a science booster club in Iowa City. Schoerning’s goal for this pilot booster club was uncontroversial enough. Provide a way for communities to promote science education and support their local science teachers.

The Iowa City Science Booster Club, a partnership between the University of Iowa and the NCSE, supports local science education by providing a platform for fun, community-based science events. These events serve as fundraisers, with money going to local science teachers.

The booster club project began in Iowa City in April 2015. They now have over 760 members across Eastern Iowa and have raised over $10,000 from local businesses and in-kind donations.

Since the beginning, graduate students in the College of Liberal Arts and Sciences' Department of Biology, under the direction of Associate Professor Maurine Neiman, have made major contributions to the project, including grant writing, community outreach, and event planning. They also have helped establish booster clubs in the Amana Colonies, Ames, Cedar Rapids, Des Moines, and Grinnell.

The UI students brought science education to over 54,000 Iowans in 2016 at a host of community events, including the Iowa State Fair in Des Moines, the University of Iowa’s Creepy Campus Crawl, and the Cedar Rapids STEM Festival. 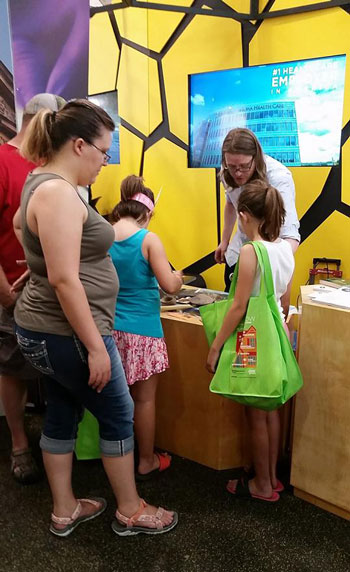 At these events, the students engage children with fun activities that simulate natural selection versus random genetic drift, the Greenhouse Effect, and ocean acidification, among other topics.

“All the training I’m receiving and all the money that’s being invested in me to become a Ph.D. isn’t just for me,” McElroy says. “This is a day and age where the value of science and the value of a tenured professor is increasingly questioned. It’s nice that I can pass on a lot of what I’m learning to the public. I can go out into the public and educate children.”

Moreno hails from a community that lacked strong science education — Elsa, Texas, which is located in extreme south Texas 80 miles inland from the Gulf of Mexico. Without a strong science background himself, Moreno was excited to join the booster club.

“When I heard (graduate students in the booster club) were teaching science to kids in underserved communities, I thought it was my turn to help those kids who are in the same situation I was,” Moreno says.

Parents also enjoy watching their children interact with the students, creating a reciprocal learning experience for both parties. These types of experiences are very important in creating cultural change and developing tolerance and acceptance of differing opinions on controversial topics, according to Schoerning.

“We’re doing fun activities and engaging with people positively. We’re talking about evolution and climate change like there’s no controversy,” Bankers says. “If we’re discussing these topics in a positive and fun way, it makes people more accepting of hearing that information. If we can engage the public in these topics, we can create science literacy fairly rapidly.”

While the children are involved in the activities, the adults complete surveys about evolution and climate change and discuss these topics with the UI students.

Effectively engaging the public in their research is critical in the students’ development as scholars.

“Science communication is a super important part of science that often gets lost in the shuffle of publications and doing your own research, which is the part that everybody expects to do in science,” Woodell says. “More people are awakening to the idea that outreach is a critical part of science. Being involved in science is not just about doing research and making progress that way. It has to be about educating the public.”

During the conversation, the graduate students don’t pretend to have all the answers. This is a discussion, not a lecture.

“People want to hear how facing these problems lead to economic growth and opportunity,” Schoerning says. “That’s a different narrative than you normally hear about climate change. It’s all about the message and the approach. You don’t have to compromise on the science. You let people be a part of the story and agents in their own lives. There are good things they can do.”

Neiman says this outreach work is preparing her students for careers in a variety of fields.

“This gives them a sense of agency and purpose that you don’t have when you’re doing basic science research,” says Neiman, whose research focus is evolutionary biology. “When you connect with the public and engage with them about how science is important, you feel like your actions are much more interesting and relevant. I can see their maturity grow through what they’re writing, thinking, and talking about as they’re involved in this program.”

The NCSE pays half of one graduate student’s stipend each semester for their participation in the science booster club. Woodell is currently receiving funding this semester.

The National Science Foundation, the University of Iowa’s Graduate College, and the UI’s Office of the Provost also provide funding for the science booster club and its students.

The NCSE also provides funding for local science teachers, who submit a one-page grant application for durable equipment to be used in their classrooms. Each grant is worth about $300, and four teachers are funded every application cycle. Teachers interested in applying should contact Schoerning for an application.

Graduate students review the grants, purchase the science equipment, and present the items to the winning teachers.