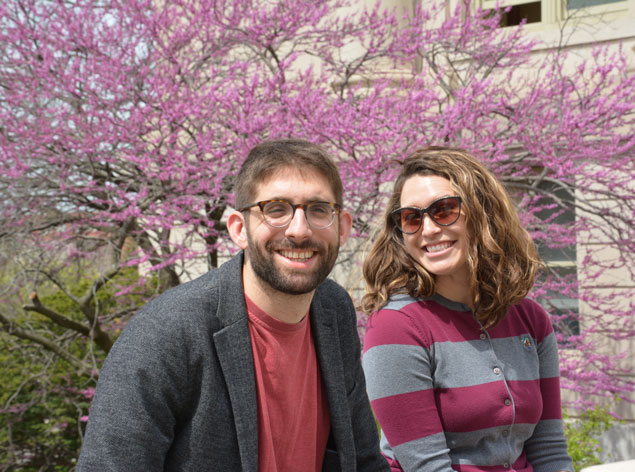 The Graduate Student Senate (GSS) exists primarily to give graduate students a voice at the University of Iowa, and is responsible for organizing the campus-wide Jakobsen Memorial Conference and allocating funds for graduate students to present their work at top conferences in their fields. The Graduate and Professional Student Government (GPSG) advocates on the behalf of graduate and professional students to university administrators, the Board of Regents, and state and federal legislators.

Under the leadership of their respective presidents, Nicole Jardine (GSS) and Joshua Schoenfeld (GPSG) – neither of whom had ever been involved in student governance before becoming University of Iowa students – these student organizations worked together during the 2015-16 academic year to make graduate and professional students more prominent in discussions on the local and state levels.

“Often, the conversations of the (Board of) Regents, (UI) administration, and the public is about the undergraduate education,” says Schoenfeld, an MD/Ph.D. candidate in the Free Radical and Radiation Biology Program. “We really wanted to bring graduate school into prominence, because it does define much of what this university is about.”

Throughout this academic year, Jardine and Schoenfeld helped advocate for graduate students and for higher education funding to UI administration, the Iowa State Legislature, and the Board of Regents.

In recognition of their leadership, learning, and loyalty, Jardine and Schoenfeld received the Hancher-Finkbine Medallion on April 12 at the 99th Finkbine Dinner.

“The Hancher-Finkbine Medallion fundamentally reflects some of my core values,” says Jardine, a Ph.D. candidate in psychology. “As a scientist, it is important to do good research, and to do it well. As GSS president, it is important for me to reflect and amplify voices who might not otherwise be heard, with the goal of improving the lives of all graduate students.”

Her graduate education brought her to a campus with a distinctive blend of innovative research and liberal arts, and she hopes that the medallion means that she has embodied and reflected those aspects of the University of Iowa.

GPSC hosted GSS, and the five other professional student governments, to meet with seven members of the nine-member Board of Regents at the University of Iowa Memorial Union prior to their scheduled monthly meeting on Oct. 21, 2015. During the gathering, graduate and professional students from various disciplines gave presentations about the value of basic research and how research being conducted at the UI can benefit Iowans across the state.

The event was part of the student groups’ desire to build a stronger relationship with the Board of Regents.

“We wanted to tell them about student successes, what’s great about this campus, and what are our needs and work to try and gain more support from them when bigger decisions come up, such as the affordability of obtaining graduate and professional degrees,” Schoenfeld says.

Brain Drain in the state of Iowa

GPSG and GSS are working together to combat brain drain—the exodus of young, well-educated individuals from the state of Iowa—and improve the future of the state’s economy.

A 2013 Iowa Workforce Development survey indicated that 35 percent of students at regent universities were leaning toward staying in the state after graduation.

In response, Schoenfeld presented the “Graduate and Professional Student Financial Retention Incentive” to the Board of Regents during their October meeting. The financial retention incentive would provide a five-year tax break for anyone with a graduate or professional degree from one of the three state regent institutions who gets a job in the state of Iowa.

“We’re working with the legislature to try and make it happen,” Schoenfeld says.

Schoenfeld coordinated the creation of this incentive. Jardine ran the financial analysis, creating a collaborative effort between the two organizations.

“(Jardine) has been a huge help. She’s always been a leader in our meetings,” Schoenfeld says. “She cares about this and wants to make a difference.”

Schoenfeld and Jardine nominated each other in addition to two other students for the Hancher-Finkbine Medallion.

Jardine views Schoenfeld as a stellar leader on campus.

“Josh brings out of the best in everyone he works with,” Jardine says. “He’s very good at seeing people’s strengths and helps them realize their strengths.”

“Nicole really helps everyone work together to make graduate students more prominent in discussions on campus,” says Schoenfeld, who will remain president of GPSC next academic year. “She represents a significant percentage of our constituents, so we want to make sure their voice is heard. Nicole has done an amazing job bringing graduate student voices to the table.”

John Keller, dean of the Graduate College and associate provost of graduate and professional education, has worked closely with Jardine this academic year. He appreciates her efforts in increasing visibility of graduate students on campus and beyond.

“Nicole is a strong advocate to improve graduate student awareness of UI teaching, funding, and professional development programming and opportunities,” Keller says. “Her leadership is exemplified by her maturity, experience, and consistent effort to build consensus.”

Next year, Jardine will serve as secretary of GPSG. She will continue to advocate for the University and for graduate students at the state level and to continue to affect change on campus with her involvement in the ongoing development of the University of Iowa 2016-2021 Strategic Plan.

“As I reflected on what GSS has accomplished this year for graduate students, I realized I wanted to leave it in the capable hands of the incoming GSS Executive Council while I continued to do work at the University that would also improve the community for undergraduate students, faculty, and staff,” Jardine says.