Bridget Coughlin has two passions in her professional career—science and people. Thanks to her graduate education at the University of Iowa, Coughlin has combined these passions in a dream job. 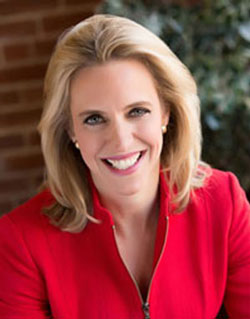 In January, Coughlin was named the fourth president of Shedd Aquarium, Chicago’s most visited cultural attraction and a national leader in animal care, conservation education and marine research. Coughlin currently serves as vice president of strategic partnerships and programs and adjunct curator at the Denver Museum of Nature and Science, where she’s worked since 2005. She will begin her new job on April 11.

“The University of Iowa and the Carver College of Medicine afforded me the opportunity to think outside of the traditional academic path,” says Coughlin, who earned a Ph.D. in biochemistry in 1999. “I had the degree and the scaffolding to explore alternative careers. These were two ingredients in the recipe that got me to the Shedd Aquarium.”

The art of science communication

Working in Professor John Donelson’s lab at the UI, Coughlin learned that collaboration among scientists was key. She routinely shared ideas with her colleagues while conducting experiments and attending journal clubs.

Coughlin has achieved great success in a non-traditional field for scientists by becoming adept at communicating her research in lay terms.

“The University of Iowa has a long tradition of students presenting to fellow students and blurring the line between scientific disciplines. Communicating your passion and your research to others is really the nucleus of communicating science,” Coughlin says. “It’s a natural bridge to take that tradition of communicating with your lab and other departments to the public arena. In my career, I have had the privilege to partner and learn from a whole fleet of educators, other scientists, writers, and marketing and PR professionals.”

“Not going at it alone is part of the culture that the University of Iowa instilled in me.” 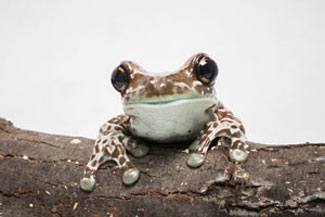 The UI also afforded Coughlin the opportunity to think outside the box during her job search. Donelson didn’t require her to pursue positions in either academia or pharmacy. This approach was liberating, but scary, at the same time.

“When you do something that’s not traditional, there’s no great playbook,” Coughlin says. “The support to make it up as I go along was really instrumental in me having alternative careers both in science policy in Washington, D.C., in the museum education space here in Denver, and then in the aquarium and conservation world at Shedd Aquarium.”

Coughlin wrote much of her playbook while researching infectious diseases.

She spent several months in Woods Hole, Mass., where she was exposed to graduate students from other universities who had different approaches to thinking about the application of science. UI faculty also encouraged her to tutor medical students in biochemistry, which really ignited her passion for communicating science.

“Bridget was a real people-oriented person interested in, not only her Ph.D. topic, but all the different areas of science and its communication,” Donelson says. “It’s a delight to watch the different turns her career is taking.”

Coughlin, a native of Douglas County, Colo., comes to Shedd Aquarium skilled in bringing people together around a common goal.

At the Denver Museum of Nature and Science, Coughlin oversees fundraising and membership activities as well as a collection of innovative and engaging education programs. In 2009, she led the creation of the museum’s health exhibit, a recipient of the Association of Science-Technology Center’s 2010 Leading Edge Award for Visitor Experience. She also established a National Institute of Health-funded Genetics of Taste Lab, a community-based laboratory that gives Museum guests opportunities to participate in ongoing scientific research.

“Bridget Coughlin has been at the forefront of developing new and engaging programs at the Denver Museum of Nature & Science for over a decade, and her passion for education extends well beyond that,” said Tyrone C. Fahner, past chairman of Shedd Aquarium’s Board of Trustees and search committee chairman, in a press release announcing Coughlin’s hiring. “Her accomplishments have established her as one of the brightest leaders of any education, research, and conservation organization today, and we are pleased she will be joining the Shedd as we enter the next generation in its history.” 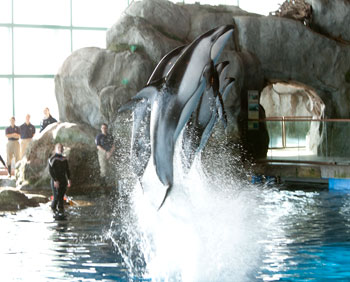 Ted Beattie, Coughlin’s predecessor at Shedd Aquarium, is retiring after 22 years on the job. Coughlin isn’t thinking two decades down the road. She’s looking to inspire her team to do great things in the near term.

Coughlin will draw on her people-first leadership style to bring Shedd Aquarium into daily lives of its patrons. She will work with her talented staff to provide an aquarium experience with no walls and no boundaries.

“I may have gotten a Ph.D. in biochemistry, but I really have a doctorate in the art of leveraging human capital,” Coughlin says.

She will employ an everywhere strategy in which people can experience the Shedd Aquarium digitally on their mobile devices, at the mall, and on the train.

“I think of it as an informal education that should appear here, there, and everywhere,” Coughlin says.

The love of science

Even though she chose a non-academic career, Coughlin doesn’t feel she’s cheated on her love of science. Seventeen years after earning a Ph.D. at the UI, science continues to fuel her soul.

“Science takes on many flavors. It might be science communication, science education, informal education, patent law, but not necessarily bench research,” Coughlin says. “Bench research is an essential avenue for you to become an expert and help contribute to field, but there are multiple avenues from there. All you’re doing (in a non-academic career) is exploring a different spoke in the wheel. Science is still in the center of the wheel.”

Coughlin still has her white lab coat hanging on her office door at the Denver Museum. She even wears it once in a while to present a curator lecture at the museum.

“Science is literally in my DNA. It’s one of my happy places,” Coughlin says.

Shedd Aquarium will become one of her happy places as well.