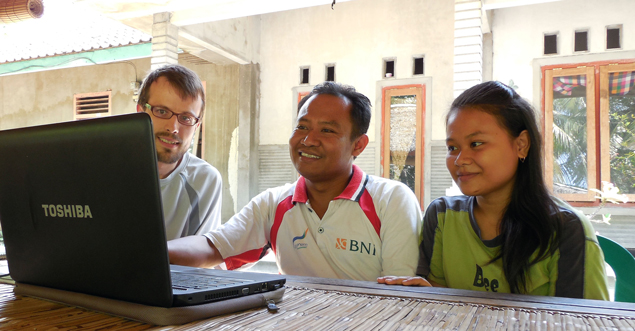 Savvy graduate students understand they must start early to secure funding for their graduate research.

Eli Asikin-Garmager, a doctoral student in linguistics at the University of Iowa, wasted little time learning how to conceptualize a project that benefits the people in his geographical research area.

The Fulbright-Hays application process is lengthy and rigorous. An applicant’s proposal, letters of affiliation, and letters of recommendation must demonstrate the project’s feasibility, prior work experience in the designated country, and a strong knowledge of the foreign language to be studied.

Asikin-Garmager is only the fourth UI graduate student to receive the prestigious fellowship in the last decade. The Cedar Falls native credits his advisor, Professor William Davies; other professors in the Linguistics Department; and the Office of Graduate Student Success for helping him achieve this honor. 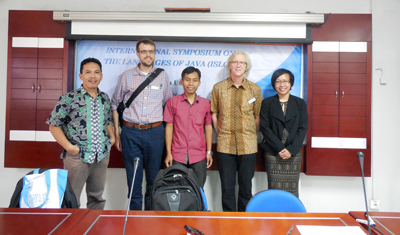 "The competition for the Fulbright-Hays Fellowship is intense. By winning, Eli has joined the ranks of top researchers studying pressing problems across the globe,’’ says Jennifer Teitle, assistant dean of graduate development and postdoctoral affairs. “Not only will he be able to fund his research abroad, but he will improve his chances for future funding and his career options."

“I was able to get a sense of what the reviewers like, and that was a huge help,” Asikin-Garmager says. “Obviously, they have to like the project. But I do think feasibility plays a large role based on some of the comments I received.”

Alex Schott, a postdoctoral research scholar in the Office of Graduate Student Success, provided valuable feedback on Asikin-Garmager’s proposal and letters of affiliation during the revision process.

“You really need someone, even if they have a technical background in your field, who is coming into it cold, to review your proposal and documents” Asikin-Garmager says. “I submitted a letter of support from the University of Mataram (located in Mataram, West Nusa Tenggara, Indonesia), and Alex gave me comments on what my collaborator there should mention and include.”

Asikin-Garmager will travel to Indonesia in January for eight months of Fulbright-Hays research on Sasak—a language spoken on Lombok Island in Eastern Indonesia. While Sasak is spoken by 2.5 million people, there is relatively little documentation of the language.

This will be his third trip to Indonesia since summer 2014. During his first two visits, Asikin-Garmager conducted fieldwork in a northern Lombok village, and established connections with University of Mataram faculty and students who will help recruit study participants and assist him with the research. These relationships, including one with his primary collaborator Nur Ahmadi, helped Asikin-Garmager demonstrate the project’s feasibility on his Fulbright-Hays proposal.

“Planting seeds that sprout later can make a difference,” says Asikin-Garmager, who taught English in Costa Rica from 2006-2008 and in Jakarta, Indonesia in 2009.

His Fulbright-Hays project has three goals. First, he intends to investigate how speakers map different meanings to grammatical structures. While the English language has an active and passive construction, Sasak has four different constructions available to express the same event. Asikin-Garmager will study what influences Sasak speakers’ decisions about which structure to use in a given situation.

Second, Asikin-Garmager wants to continue his work of documenting the Sasak language. Last June, Asikin-Garmager traveled to Lombok Island on a Graduate College Summer Fellowship and worked with Professor Ahmadi and others from the University of Mataram to transcribe and translate 25 narratives, approximately half of which they recorded themselves.

His final research aim focuses on variability of word order in Sasak. The nature of any language is such that words are placed in a certain order according to, not only the grammar of the language, but other universal constraints on production. The precise inventory of these constraints remains an open question. Asikin-Garmager wants to know what such constraints might be operating in Sasak, a language that allows considerable word order flexibility.

“There’s the idea that we put the shortest thing first because it’s the easiest to recall from memory,” Asikin-Garmager says. “I’m also trying to see if we can demonstrate a similar effect for animacy or humanness in Sasak. Is the animate or human thing ordered first? When languages allow flexibility, what determines what goes first?”

While he is conducting research 10,000 miles from home, Asikin-Garmager believes Iowans can benefit from a better understanding of the Sasak language.

“Documentation of a wider range of languages helps us better understand the diversity found in human language,” Asikin-Garmager says. “Since languages vary greatly, such work can expand our understanding of how we use and process language in general."