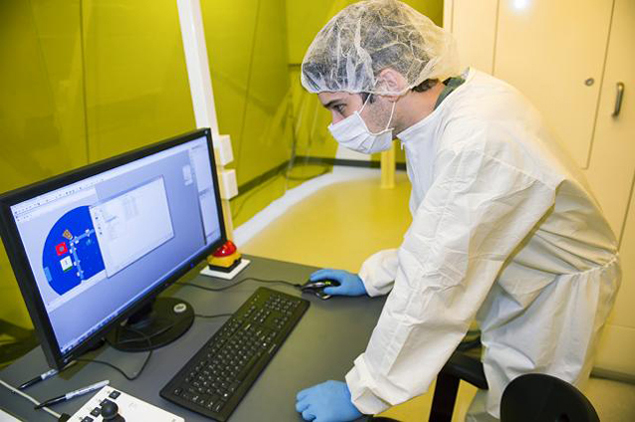 Jake McCoy may not admit it, but he’s a tinkerer.

The fellowship will cover his tuition and professional travel expenses for the next three years, valued at up to $222,000.

“I was surprised by it,” says McCoy, a New Hampshire native who joined the UI’s physics and astronomy department after earning a bachelor’s degree from the University of Massachusetts Amherst. “It was my first time applying. I think we had something at the right time that NASA was interested in.”

The project McCoy is referring to is to find missing matter in space. Physicists think we’ve accounted for only about half the mass in the universe—stars, planets, supernovae, black holes, and the like—and they’re seeking new, sophisticated ways to detect the elusive stuff.

Specifically, they’re hunting for baryons, particles that make up more than 99.9 percent of the mass of atoms found in the cosmos. Though baryons are all around us, scientists think some of the missing ones may be lurking in deep space between galaxies, known as the warm–hot intergalactic medium. But those distant baryons can't be observed unless you look for their X-ray signature using a telescope that is of a much higher quality than what is currently available.

To find the missing matter, McCoy is building a device to reflect and “read” X-rays in those remote intergalactic neighborhoods. Unlike light, X-rays can be hard to detect: They don’t penetrate Earth’s atmosphere, so you need to be in space to find them. Even then, what they’re saying about some faraway body is tricky to divine, which puts a premium on sophisticated equipment to make clean detections. McCoy’s instrument seeks such precision by breaking up X-rays and analyzing them somewhat like how you’d identify colors in the visible light spectrum.

McCoy spends hours with the new tool in the UI’s Microfabrication Facility, in the Optical Science Technology Center, sketching  patterns on the nanoscale (one-billionth of a meter or 1/80,000 the width of a human hair) with an electron beam, like a very fancy Etch-A-Sketch. The patterns are then tested for their diffraction quality, or the the ability to separate the X-rays and define them.

“This tool will enable Jake to ‘write’ the required grating features into our optics in a single step, a process that currently takes nearly a dozen steps with low yield,” says Randy McEntaffer, associate physics professor and McCoy’s mentor.

By next fall, McCoy hopes to have a prototype ready to test at NASA’s Marshall Space Flight Center in Alabama and at the Advanced Light Source in California. If successful, the tool will be “a key performance diagnostic for upcoming space missions,” McEntaffer says.

No pressure, right? “I don’t feel it overly, not to the point where I’m stressing,” McCoy says. “But I know I have a super long way to go. I just started in the field, and I’m just trying to figure out what’s going on. But I feel like I can do it.”

McEntaffer does, too. He says he chose McCoy because McCoy had proven himself creating a software package that simplified the transfer of X-ray data collected by space instruments to NASA. McCoy had never worked on such a project before McEntaffer handed him the assignment.

“He doesn’t get flustered by problems,” says McEntaffer, a Sioux City native who earned bachelor’s degree in physics and astronomy from the UI. “He just goes and solves them.”

It seems to satisfy that tinkering itch in McCoy, whether it’s in music or academia. “If I’m not willing to start projects that I didn’t know anything about, I don’t know where I’d be today," says the 25-year-old. “That’s been my theme in graduate school.”