Connerly and Merrill honored for excellence 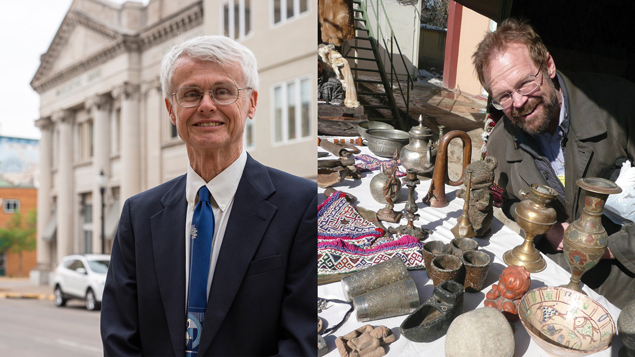 Graduate College faculty members Charles Connerly and Christopher Merrill were honored for their significant contributions to the University of Iowa and the community during the Faculty and Staff Awards Banquet Oct. 6 at the Levitt Center for University Advancement.

Connerly, director of the School of Urban and Regional Planning and executive committee member at the Public Policy Center, was one of two recipients of the 2015 Michael J. Brody Award for Faculty Excellence in Service. Connerly was nominated for the Brody Award by Peter Damiano, director of the Pubic Policy Center, and the Graduate College. The Brody Award was created by faculty, for faculty, and is awarded by the UI Faculty Senate in memory of Professor Michael J. Brody.

Merrill, director of the International Writing Program, received the Regents Award for Faculty Excellence for his work in public education across the domains of teaching, research, and service. The University of Iowa selects up to six faculty members each year to receive this award, given by the Board of Regents, State of Iowa.

“The recognition of Professors Connerly and Merrill with these prestigious awards is a tribute to the longstanding and important contributions each has made of the University,’’ says John Keller, Associate Provost for Graduate and Professional Education and Graduate College Dean. “The Graduate College is especially thrilled to have formal affiliations with Chuck and Chris.”

Connerly joined the UI School of Urban and Regional Planning in 2008 as professor and director. His current research is an assessment (part history, part contemporary analysis) of Iowa's community efforts at promoting sustainability, which builds on Connerly's work with the community engagement initiative of which he is the principal founder, the Iowa Initiative for Sustainable Communities.

Merrill was named director of the International Writing Program in 2000. A poet and essayist, Merrill works across genres with books that include four collections of poetry, translations of the poetry of the Slovenian Aleš Debeljak, several edited volumes, and four books of nonfiction. His work has been translated into twenty-five languages.