Developing voices a world away 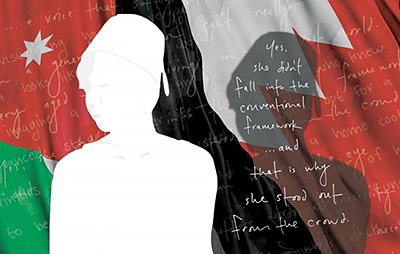 Mehr Ul Ain Mushtaq loves putting her thoughts down on paper—she always has. Her father, whom she considers her mentor, was often amused by whatever stories his daughter would write and read out loud to him. During his daughter’s formative years in Saudi Arabia, he encouraged Mushtaq to carry a pocket dictionary; as he would often say, “You can never learn too many words.”

Mushtaq went to college for business, and continued to nurture her writing passion. She sent articles concerning trends and social issues to news blogs and magazines; when her words were published on a regular basis, she realized her true calling, and there was no looking back.

“I love expressing oneself in the depths of words, and the level of contentment I have felt working as a journalist is incomparable to anything else,” says Mushtaq, 28, who lives in Bahrain. “Writing feature stories and local reporting led me to living life to the fullest; getting into the realm of creative writing was like fitting the last piece of the puzzle.”

Mushtaq was one of nearly 20 female participants in Manama, Bahrain, and Amman, Jordan, to take A Room of One’s Own: Developing the Authorial Voice, a distance-learning course offered in the spring by the International Writing Program at the University of Iowa.

Taught by Iowa Writers’ Workshop graduate Naomi Jackson, the course focused on issues of artistic identity while fostering the participants’ authorial voices and building a community of women writers. It featured weekly live video classes that brought together the participants in Amman and Manama. A course website provided readings and writing assignments and hosted individual online workshops of students’ writing assignments.

“The students in my class are fiercely talented, widely read, intellectually open, and poised to transform the world around them,” says Jackson. “Teaching this class made me confident that the next generation of women writers from Bahrain and Jordan will have a significant impact not just on the literary landscape of the Middle East, but on the larger world stage.”

The IWP worked with U.S. Embassies in Jordan and Bahrain to arrange the course dates and structure; those embassies reached out to local universities to recruit students with sufficient English to take advantage of the unique course structure. From the moment she learned she would be part of A Room of One’s Own, Mushtaq was overcome with excitement. Through the course, she became familiar with acclaimed work in a number of genres, including pieces by Shirley Jackson, Jamaica Kincaid, and Naomi Shihab-Nye. She loved what was called the “imagination station” portion of class, where Jackson would ask the students to create a short piece based on the discussion in process.

“There was immediacy to it, and through this exercise I noticed how we had all grown in expressing our thoughts so confidently and in such creative ways,” Mushtaq says.

Following the eight-week course, Mushtaq gained confidence but also realized the global scope of fascinating writers. She continues to read and explore ways to feed her writing skills—she now carries a journal with her at all times in order to record thoughts and ideas when
they arise.

What she has gained from A Room of One’s Own might just propel her toward her goal of a published novel. “This workshop has brought me a step closer to becoming a novelist,” Mushtaq says. “I’m closer to the point where my children can point at my work through a bookstore’s window and exclaim, ‘Look, Mommy’s book is here, too.’”

This article is adapted from a story that first appeared in Iowa Now.