Piecing together the memory puzzle 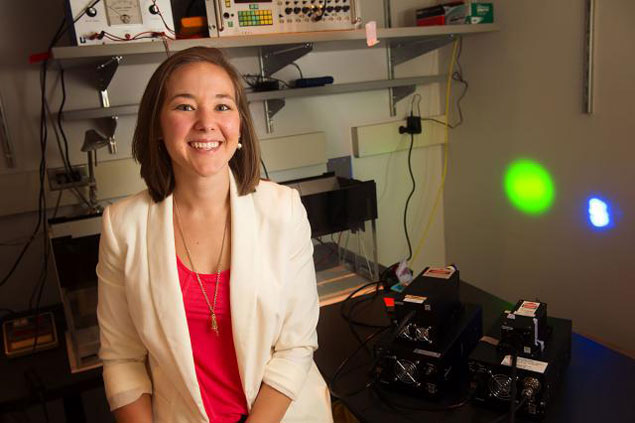 But what she did have were amazing science teachers who supported her at every step and stimulated her interest in the subject.

“I didn’t know any researchers doing work similar to what I am doing now,” says Huff, a doctoral student in the University of Iowa Department of Psychology who grew up in the town of 2,000 located almost 60 miles southwest of the state capital.

“However, I was lucky enough to have wonderful science teachers from grade school to high school who always made learning fun and exciting,” Huff adds. “I don’t think I realized research was a career possibly until I got to college and even then, it was probably the end of my sophomore year before I really understood my options moving forward.“

Huff has come a long way since those early years. After obtaining a psychology degree from Simpson College in Indianola, Iowa, she decided to attend the UI for her graduate education because of its reputation for academic excellence, specifically in the UI Department of Psychology, and the proximity to her family.

Huff was recently awarded a National Research Service Award (NRSA) from the National Institutes of Health to fund her research on the roles of different neural pathways during memory consolidation in fear conditioning.

She credits the mentor-mentee relationship as also very important to both her graduate education selection and her success in obtaining this highly competitive award.

Huff says she discovered an outstanding mentor in Ryan LaLumiere, her adviser and assistant professor of psychology in the College of Liberal Arts and Sciences.

“You need to pick what’s important to you in selecting a mentor. I wanted to work in a small lab for someone who is just getting his feet off the ground,” Huff says. “I knew I was going to be able to see Ryan a lot. I meet with Ryan every week for about an hour or more. He’s intimately involved in the process.”

Understanding the neurobiology of memory consolidation is critical for treating memory-related disorders and injuries, such as traumatic brain injury and Alzheimer’s.

Huff, a fourth-year scholar in the Behavioral and Cognitive Neuroscience Program, is focusing her research on the basolateral amygdala (BLA), a small area of the brain that has long been implicated in disorders such as phobias and post-traumatic stress disorder. The BLA has also been shown to modulate memory consolidation for many types of learning.

This ability to influence memory consolidation is thought to be controlled through discrete pathways to distinct brain regions, including the nucleus accumbens (NA).

“Even though the amygdala does a lot in terms of fear memories specifically and many memories generally, other brain regions could be processing individual aspects, such as the emotional components, of memory,” says Huff. “There are multiple parts of a memory, and it takes the brain as a whole to put it all together.”

Huff is using optogenetics on rats to isolate activity in neural pathways leading from the BLA to the NA’s two subregions, the core and shell. Optogenetics uses light to control neurons that have been genetically sensitized to light.

“I really got into the learning and memory research because of my mentor, Ryan LaLumiere,” Huff says. “ There are always multiple projects going on in our laboratory and early in my time in the lab, he asked if I would be interested in seeing how the experiments are run and possibly being involved in learning and memory research. The questions being asked seemed very exciting, which was enhanced by the use of optogenetics, which really is a cutting-edge tool for investigating how the brain works.”

Prior to the development of optogenetics a decade ago, scientists had no reliable method to control and measure connections between brain regions.

“We want to use optogenetics to help us determine the roles of these two different pathways in different aspects of learning. That’s a tremendous advance in our knowledge of how the brain works,” says LaLumiere. “It’s about the connections in the brain, when neurons talk with each other.”

Prior studies suggest that the NA subregions may have distinct roles in memory processing related to contextual learning and nociceptive responses (resulting from painful stimulation), such as those involved in contextual fear learning.

“We want to know what these pathways leading out of the amygdala are doing,” Huff says. “We know the amygdala projects to the nucleus accumbens, and both regions play a role in fear memory. We don’t know for sure how they are interacting.”

Huff is optically stimulating and inhibiting the BLA-NA pathways to understand their respective roles in the brain’s consolidation of contextual learning and nociceptive learning (via foot shock).

She plans to finish her doctoral degree by May 2016 and says she is in the early stages of looking for a postdoctoral fellowship.

The National Research Service Awards (NRSA) are a family of grants provided by the National Institutes of Health (NIH) for training researchers in the behavioral and health sciences. They are a highly selective source of funding for doctoral and postdoctoral trainees.

The NIH’s National Institute of Mental Health awarded a two-year grant of $58,838 to the UI in support of Huff’s project. The award number will cover Huff’s stipends, tuition and fees, and institutional allowance (health insurance, research supplies, etc.).

“Mary showed excellent potential, which is one of the things the NIH looks for in an NRSA application,” says LaLumiere, adding that Huff already had a strong publication record when submitting her application. “Her research plan was well thought out and straightforward. She wasn’t proposing the moon shall we say. She was proposing something that was reasonable to accomplish.”

Believed to be the UI’s only NRSA recipient in this cycle, Huff worked on her application the entire 2013 fall semester. She submitted materials including a research training plan, biographical statement, and letters of reference.

“There are students at this university doing great things, but they don’t think it’s possible to get an NRSA,” Huff says. “I can’t lie to anyone and say (the application process) was easy. I had to rearrange some priorities. I completed my application while taking classes and doing research. I had to decide how I was going to make it all fit without falling behind.”

Huff adds that even if she hadn’t received an NRSA, she would still consider her time completing the application well spent.

“This has given me a better understanding of what it takes for me to get funding,” Huff says. “It has given me a realistic glimpse into what it’s like to do research as a career.”