Catina Bacote takes a stroll down memory lane. She is a 7-year-old sitting at her new typewriter, putting her thoughts on paper via the shiny keys. Birthday present ideas and ages of family members are some of the topics she chronicled in her New Haven, Conn., bedroom.

“I love that little girl. She just seemed to know what she wanted to do,” Bacote says about herself. “She wanted to be an artist.” 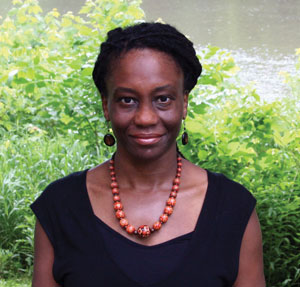 For years, Bacote stopped writing, then started again. Stop-start, stop-start, never moving completely away from her craft. She worked for six years teaching humanities, history, and literature to junior high and high school students in New York City and eight years for an educational nonprofit.

Finally, Bacote put her writing front and center. She applied to and was accepted into the University of Iowa’s top-ranked Nonfiction Writing Program in 2011. She also received a Dean’s Graduate Research Fellowship from the Graduate College.

“Writing isn’t something I do for career advancement or financial security. It’s something I feel called to do,” says Bacote, who graduated from the UI with an MFA in nonfiction writing in May. “When I write, I feel alive in some way. I feel like my writing is my intervention in the world. It’s my way to disrupt familiar narratives. It’s my way to tell stories that aren’t often told.”

Bacote seeks to understand the world better through her writing. She asks hard questions and takes literary risks in order to gain new perspectives on life’s unexpected twists and turns.

Her current project dives into personal experiences of family and circumstance.

Bacote is writing a detailed account of life in the New Haven public housing project of Eastern Circle and its drug and violence epidemic of the late 1980s and early 1990s. According to the New York Times, New Haven, in 1990, ranked sixth in violent crimes per capita in American cities with more than 100,000 residents. In October 1991, New Haven had an average of six reported gunfire incidents a day.

“I want people to read [my book] and think about the history of places like Eastern Circle. A lot of people were shot, a lot of people were murdered, and a lot of families suffered,” says Bacote, who is in the process of writing the book. “This story happened and involves our entire country, not just the urban centers and low-income areas."

Bacote also writes personal essays that examine how her family and their neighbors wrestled with a troubling and changing landscape in New Haven. Her younger brother, Bernard, is a focus of her writing. Bacote says her brother had two stays in prison, totaling eight years, for selling drugs. He is currently home raising his two children and working.

“I not only want to tell my brother’s story, but explain how greatly it affected my life and my mother’s life,” says Bacote, who received the first-place award in the Creative Works Division at the UI’s 2014 Jakobsen Conference for her submission about her family’s experience in Eastern Circle.

The UI English Department selected Bacote as the Provost Post-Graduate Visiting Writer for the 2014-15 academic year. Bacote will teach the Creative Non-Fiction Reading course both semesters, while continuing to write her book. Ultimately, she plans to pursue a career as a college-level teacher and writer.

Bacote believes the Nonfiction Writing Program provides thorough training. By reading her fellow students’ pieces, she gained insight into how their minds were working. Colleagues’ written and oral critiques of her work helped Bacote better understand her own craft.

“I am not trying to sound like a ‘writer.’ I found my personal voice,” Bacote says. “I try to channel the people I’m talking with, like my family and former neighbors. I’m not just writing about them. I am writing through them.”