Research shows that these older adults have low levels of knowledge about how HIV is transmitted and the risk factors involved. Erin Robinson, a third-year doctoral student in the School of Social Work at the University of Iowa, believes health care providers can play a key role in communicating with older adults about AIDs transmission and its risk factors. 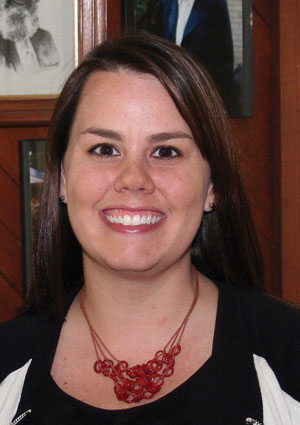 “Older adults report that they get most of their health information from their health care providers,” says Robinson, a native of Winterset, Iowa. “Research suggests that providers aren’t as aware of HIV-specific issues around aging. When they think of HIV, they think about HIV in younger generations. [Health care providers] will be bombarded with older adults in this baby boomer population for the next 30 years and they’re going to have to rethink how they talk about sexually transmitted diseases.”

Robinson acknowledges that older adults can have an array of health issues, so their sexual health isn’t always a priority in conversions with doctors. She adds that there’s little research about how care providers can influence positive health behaviors among older adults, specifically regarding HIV prevention.

“I’m interested in using [health care providers] as a starting point to create tailored messaging to older adults about how they can prevent transmission of AIDS, such as using condoms, talking to your partner, and cleaning needles, if you’re a drug user,” says Robinson, who holds a master’s degree in public health from the University of Iowa as well as a master’s in social work from Washington University in St. Louis.

Robinson began doing HIV outreach work after earning her bachelor’s degree in social work at the University of Iowa in 2005.

Robinson is customizing her doctoral degree to give herself the best opportunity to become a social work professor in the future. This approach enabled her to earn a UI master’s of public health.

Training in public health “has made a tremendous impact on how I approach patient-provider communication around HIV/AIDS,” Robinson says. “It has allowed me to understand, from both a public health perspective and a social work mindset, the importance of intervening with the healthcare providers.”

Robinson says she is fortunate to have received quality mentoring from UI faculty, most notably Sara Sanders, associate professor of social work.

“I’ve had really good role models who have shown me high standards and what it likes look to be really good at what you do,” Robinson says. “Sara Sanders is an incredible person in mentoring students and helping them believe they have what it takes to reach their full potential.”

Sanders taught Robinson as an undergraduate and is now her dissertation advisor.

“It has been a pleasure working with Erin. Her potential leadership as a gerontological scholar is being recognized by others as she was awarded an AGE SW pre-dissertation fellowship, which connects her to leading researchers in the country,” Sanders says. “I see great things in Erin’s future.”