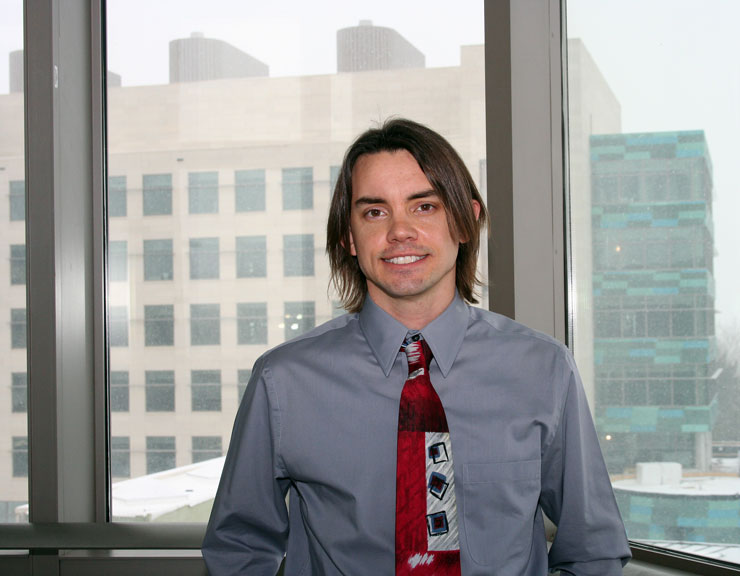 You finish a hard workout in the gym and every muscle in your body aches. No worries, your muscles are regenerating and soon will be good as new.

However, as we age, this regeneration process becomes less efficient. Patients with muscular dystrophy have a much grimmer prognosis. They live with this muscle weakness daily and eventually lose the ability to do the things most people take for granted, like walk up a flight of stairs.

Matt Goddeeris, a postdoctoral research scholar in molecular physiology and biophysics at the University of Iowa, is examining how the interaction between the protein dystroglycan and the enzyme LARGE could help prevent muscular dystrophy.

In a paper published in Nature (2013), Goddeeris and his colleagues showed in mouse muscle that a coordinated increase in the cellular makeup of LARGE and dystroglycan facilitates rapid extension of LARGE-glycan repeat chains, thus providing normal skeletal muscle function.

“When a cell changes into another type of cell, many sugars on its surface are going to change,” Goddeeris says. “If you have a disease, the sugars coating your cells are also likely to change. We are just starting to understand why that’s important. We have a new model for how this protein dystroglycan works.”

Muscle is different from most other tissues in the body in that it requires dystroglycan to have a long LARGE-glycan repeat chain. Goddeeris and colleagues discovered why muscle requires this by, in part, using synthesized LARGE-glycan repeats to show a direct correlation between LARGE-glycan extension and its binding capacity to extracellular ligands. A ligand is a substance that binds specifically and reversibly to another chemical entity to form a larger complex.

“This protein dystroglycan isn’t just binding to the extracellular matrix. It also helps to organize the proteins of the extracellular matrix so that they can help muscle resist damage,” Goddeeris says. “By changing this outside environment, the cell is able to modify where it lives. The cell is engineering its own environment by changing the length of this sugar on dystroglycan.”

What does this mean for patients with muscular dystrophy?

“These experiments tell us that the length of the LARGE-glycan in patient muscles is important, and tells us why some patients’ diseases are more severe than others,” Goddeeris says. “Some patients are able to make the right amount of sugar when the muscles are being formed, but they’re just not able to maintain it for the lifetime of the muscle fiber.  Those patients are building muscle with the right extracellular environment, and might have a less severe form of the disease as a result.”

Preparing to take the next step

Goddeeris is an idea person who works with a successful scientist at Iowa—Kevin Campbell, Howard Hughes Medical Institute investigator and professor of molecular physiology and biophysics.

“My research has been my own ideas. If you’re going to be successful, you have to come up with your own ideas,” Goddeeris says. “My mentor has been really good at identifying key experiments I would need to get a high profile paper published. It doesn’t mean anything unless you can get it published.”

Goddeeris admits the sales pitch is different for a manuscript than for a grant proposal.

“For a grant proposal, you’re trying to sell the grant reviewers that this is a useful idea and you have the skills to do it,” Goddeeris says.  “For a manuscript, you want to be bold in making a statement, and then follow it up with the right, convincing experiments.”

As Goddeeris nears the end of his postdoctoral appointment, he is looking to the future.

After interviewing for jobs in both academia and industry, Goddeeris accepted a position at Mitokyne, a biotechnology company in Cambridge, Mass. Mitokyne discovers and develops new small molecule modulators that boost mitochondrial functions.