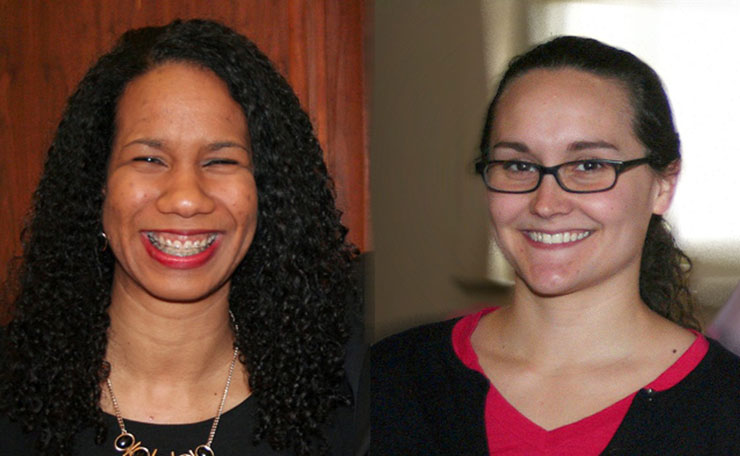 Kaylia Duncan and Anna Lynch have contributed to the remarkable achievement of University of Iowa graduate students by each winning the 2014 Midwestern Association of Graduate Schools (MAGS) Distinguished Thesis Award.

Duncan, who earned her master’s degree in pathology in 2013, won the award in the biological and life sciences category for her thesis “Dynamics of Tumor Progression and Therapy Response in IL-6 and MYC Driven Plasma Cell Malignancy,” a study that uses a mouse model to determine patterns of tumor progression in cases of multiple myeloma.

“This is a wonderful recognition of the outstanding work that our graduate students undertake and accomplish,” says John Keller, UI Associate Provost for Graduate Education and Graduate College Dean. “Kaylia and Anna both received virtually perfect scores by the reviewers for their superior research.”

Duncan and Lynch were nominated for the MAGS Award after receiving the L.B. Sims Outstanding Master’s Thesis Award from the UI Graduate College.

The Council of Graduate Schools/University Microfilms International Distinguished Dissertation Award is the nation’s most prestigious honor for doctoral dissertations. Iowa has won five national awards, more than any other public institution and tied with Yale. Thirteen other Iowa nominees have been finalists in the competition.
Iowa now has three MAGS Distinguished Thesis Award winners. Brigitte Hecker Salami (Art History) received the honor in 1999. Duncan and Lynch will receive their MAGS Awards during a ceremony tonight in Chicago.

“The MAGS Award is a wonderful recognition and I humbly accept it,” says Duncan, a UI doctoral student in the Interdisciplinary Graduate Program in Molecular and Cellular Biology. “This award is an incentive to push forward. I am fortunate my research was recognized. A lot of grad students spend long days in the laboratories in search of that data, and a lot of that work goes unrecognized outside of the lab.”

“I am astonished to win. I don’t know how to put it into words,” Lynch adds.

Duncan, originally from Saint Vincent and the Grenadines, used positron emission tomography (PET) imaging to assess the dynamics of tumor progression in a mouse model of multiple myeloma.

“We found early tumor onset in young mice previously not associated with disease,” Duncan says. “Once we had those metrics of how the tumor progresses in this mouse model, we used that as a reference to move ahead with pre-clinical studies of a novel inhibitor.”

Duncan discovered that experimental drug MLN2238 is effective in increasing the overall survival of the mice.

“After two or three consecutive doses of this drug, we saw a notable decrease in tumor burden,” Duncan says. “Witnessing this development, we can use this mouse model as a means for screening other drugs using PET imaging.”

Much like with human patients, the majority of mice relapsed.

Education’s role in the Reformation

Lynch, a native of Vermillion, S.D., addressed a gap in the understanding of education’s role in the Lutheran Reformation between social and confessional historians.

“Part of what I studied was how education was used to further the Reformation,” Lynch says. “Once the Reformation came in, they wanted people to be able to read the Bible so they needed some mechanism to teach them. That’s when the first required schooling came in.”

This created two camps of academics—the social historians and the confessional historians.

“The social historians say the theological aspect doesn’t matter. You should just focus on the dry facts. How many students were in the class and what books were they reading,” Lynch says. “The confessional historians say it’s all about the theology. I think there should be more people studying both perspectives. I tried to bridge the gap in my thesis.”