The hippocampus is no longer just for memory.

University of Iowa researchers show that this brain region is involved in language processing as well, possibly providing additional insight into the accompanying deficits in memory and language in patients with Alzheimer’s disease and other forms of dementia.

In a paper published in the Journal of Experimental Psychology, the UI scientists make a connection between the hippocampus and language processing by illustrating that the online interpretation of pronouns depends on the hippocampus. Pronouns are words used to refer to a person, place, or thing (e.g., he, she, it). 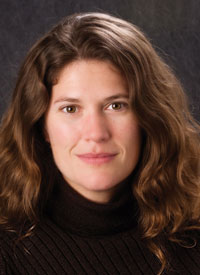 The hippocampus has long been recognized for its role in forming long-term memories. Current research, however, is moving away from the idea of localization of function, instead subscribing to the belief that multiple brain areas work together to contribute to complex behavior, be it forming memories or language development.

“Some of the most critical aspects of being able to use language include the ability to bind together pieces of information and hold onto that information while talking or listening,” says Melissa Duff, assistant professor of communication sciences and disorders at the UI and the paper's senior author. “The hippocampus has long been known for its role in relational binding, and more recently for its role in online information processing. With these two roles, it makes sense that the hippocampus would be critically involved in using and processing language.”

Duff and her fellow scientists combined eye tracking with neuropsychological methods, where participants—four amnesic patients with bilateral hippocampal damage, four people with brain damage outside the hippocampus, and participants with no brain damage—viewed a scene while listening to short dialogue introducing two characters.

For example, Melissa is playing violin for Debbie/Danny as the sun is shining overhead. She is wearing a blue/purple dress.

An analysis of eye gazing showed that the control group and people with brain damage outside of the hippocampus rapidly identified the intended referent of the pronoun when gender uniquely identified the referent (e.g., in the example above, when the pronoun she could only refer to Melissa because Danny was the other character). When it did not, they showed a preference to interpret the pronoun as referring to the first-mentioned character.

By contrast, hippocampal patients, while exhibiting a similar gender effect, displayed significant difficulty using information about which character has been mentioned first to interpret the pronoun. This finding suggests that the hippocampus plays a role in maintaining and integrating information even over a very short discourse time.

“This finding tells us that the memory impairment is affecting their use and understanding of language,” says Jake Kurczek, a UI graduate student in neuroscience and the paper's first author. “Although there were two short sentences, the memory-impaired patients were not able to follow the characters in the story because they could not hold onto the information at the beginning. This suggests real challenges in their ability to follow the thread of even short, simple conversations. We’re revealing a type of difficulty in language that has not been reported before on this time scale in patients with isolated memory impairment.”

This research has implications for how doctors and caregivers communicate with patients with memory impairment, such as Alzheimer’s disease.

“It may be helpful to use more specific content, such as repeating the referent instead of using a pronoun, when speaking with memory-impaired individuals to prevent ambiguity,” says Duff, who's a member of the Neuroscience Program at the Graduate College. “This would not increase their ability to remember for later, but could facilitate their understanding in the moment. That could help them more readily understand and participant in conversations associated with their health care or basic needs.”

Sarah Brown-Schmidt, assistant professor of psychology at the University of Illinois-Champaign-Urbana, is a contributing author on the paper, which was published in November.