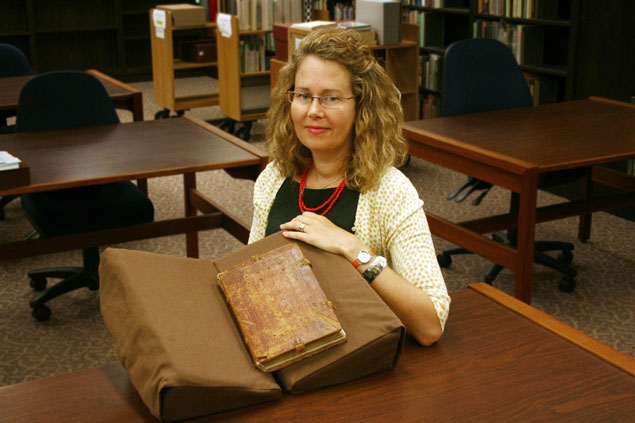 The manuscripts, dating back to the 1500s, live in their original bindings. Given their age, these unspoiled specimens are a lovely find, with words beautifully written in either Latin or Italian on thin material made from calfskin, sheepskin, or goatskin.

These are liturgical, devotional, and theological works hand copied by Italian religious women who played a far more important role in the Renaissance than commonly thought.

For her award-winning dissertation, University of Iowa scholar Melissa Moreton examined over 200 manuscripts. She documented an exhaustive list of manuscripts produced by Italian Renaissance nuns, half of whom lived and worked in Florence, Italy, the birthplace of the Renaissance. Moreton went on to analyze all aspects of these manuscripts to find that these nuns were surprisingly connected to the humanist revival of the arts and scholarship of the time.

“Moreton challenges the scornful portrayal of women by Italian humanists of the time, a picture accepted by most scholars ever since that there was little or no book learning for women except under the most extraordinary circumstances,” says Constance Berman, professor of history and Moreton’s dissertation advisor. “She shows that these nun-scribes who were producing manuscripts and printed books were well educated in the types of book learning done by priests and humanists alike.”

Moreton, who earned her doctorate in history in 2013, received the 2013 D.C. Spriestersbach Dissertation Prize in the humanities and fine arts category. Her dissertation is titled, “’Scritto di bellissima lettera’: Nuns’ Book Production in Fifteenth- and Sixteenth-Century Italy.”

As a Spriestersbach Prize winner, Moreton becomes this year’s UI nominee for the Council of Graduate Schools/University Microfilms International Distinguished Dissertation Award in the humanities and fine arts. This national award is the most prestigious dissertation prize in the country. Iowa has five national winners, more than any public institution. Thirteen more Iowa nominees have been finalists in the competition.

Nuns are often viewed as cloistered, religious women who are set apart from the rest of society. As a result, their work is often marginalized.

However, after studying these manuscripts, Moreton discovered that history should paint a much different picture of these religious women.

Moreton says secular and religious life was intertwined during the Renaissance, and high dowry fees prevented a father from negotiating marriage agreements for all his daughters. For example, if a father had six daughters, he might be able to pay the dowry for only two, and the remaining four daughters would enter into convent life. Many of these religious women came from elite families. This, says Moreton, dispels the notion that all nuns were too poor to do anything but enter the convent.

“The reality was that—in Florence by the mid-16th century—1 in 19 people was a nun, and there’s a good chance she was educated,” says Moreton, who received a Ballard-Seashore Dissertation Year Fellowship in 2012-13 and a T. Anne Cleary International Dissertation Research Fellowship in 2008 from the Graduate College. “Within the convent, bookmaking was a way for educated women to express their intellectual and artistic abilities. To produce these books, they had to know Italian, Latin, and Greek. They also had to have a range of scribal and artistic abilities. These were educated women.”

Moreton estimates that 60 percent of the copied manuscripts were devotional and/or theological texts used for private meditation and study. Moreton found most of these manuscripts in good condition.

“Since these devotional books were not high-end luxury manuscripts with elaborate painting and gilding, they were largely left alone and not cut up or rebound over the centuries,” Moreton says. “So, a very high number of these books are still in their original bindings—a rare treasure that provides a wealth of information about books and learning in the period.”

Moreton says that by mining the primary documents related to these religious houses, “you can flesh out the lives of these women and contextualize the work they did.”

Jonathan Wilcox agrees. He is professor of English and member of Moreton’s dissertation review committee.

“The surviving accounts of an early printing press are particularly fascinating. This allows Melissa to unpack the economics of early printing and to point to the complex interaction of printing and hand-copying,” he says. “Melissa is able to uncover some of the structures of power that underlie book production in religious houses, including both cooperation with powerful men—religious or secular—and cases where the production was apparently motivated by the women themselves.

“She arrives at the hard-won conclusions that nun-scribes are generally of very high status, and they collaborated more than one might expect with monks and secular folk.”

Impact of her work

Moreton came to the UI trained as an art historian after earning a master’s degree in Italian Renaissance Art History in Florence, Italy, through Syracuse University.

In 2009, Moreton earned a graduate certificate from the internationally-known Center for the Book after producing an analysis and transcription of a late-medieval convent record book from Venice, which is housed in Special Collections at the UI Main Library.

Her work—first at the Center for the Book and later as a doctoral student in history in the College of Liberal Arts and Sciences—contributed to the scholarship found in her award-winning dissertation. Her work combines expertise on book production, manuscript studies, and the history of 15th- and 16th-century Italy.