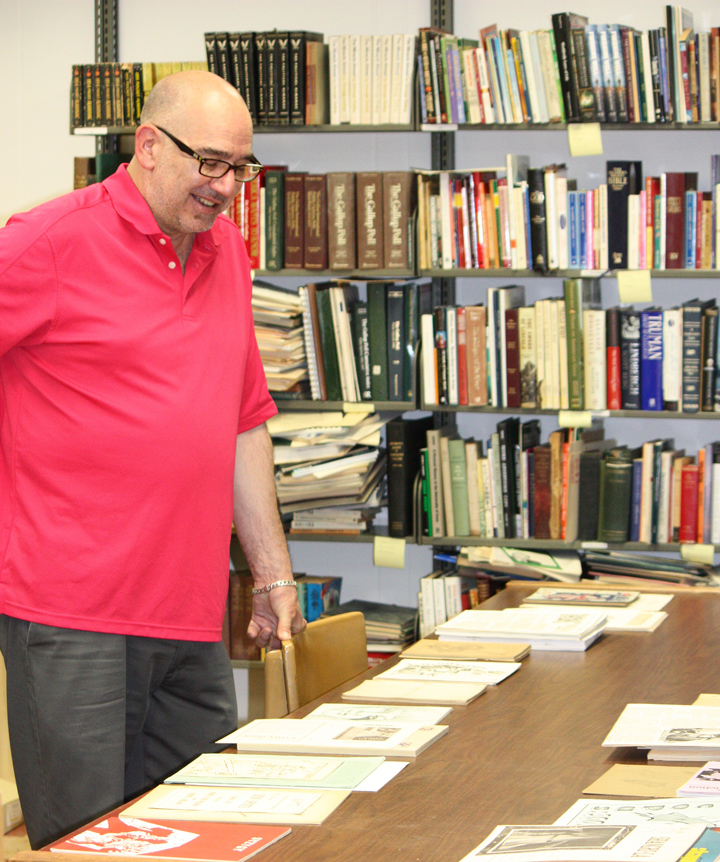 See an interview of Balestrieri inside the UI Special Collections Archive.

High up on the fourth floor of the Main Library on the campus of the University of Iowa is a rickety metal cage. It’s locked. Inside are books, hundreds of books, that once had meaning, that represented something to someone from another decade, perhaps even another century.

On a hot June afternoon in Iowa City, Peter Balestrieri unlocks the cage. He’s sweating when he walks inside toward a stack of boxes, one after the next. Balestrieri, 60, pauses and points toward a collection of books about dogs. “Look at these,” he says. “These books over here were collected by one person. This was someone’s passion.” He opens a cover. “This one goes back to the 1800s. Think about what this collection meant to someone. Think of the history. Now it’s up to us to make sure the history and the legacy live on.”

Past the dog books, Balestrieri, who earned his Master of Arts in the UI’s School of Library and Information Science in December 2012, gestures toward the boxes. Inside them—all 350—lives the legacy of Rusty Hevelin, the World War II veteran who was one of the most prolific collectors of science fiction zines and fan literature the industry has ever known. Hevelin, who died in 2012, sold the collection to the UI. Balestrieri’s charge carries immense weight: catalogue the collection, share it with the public, and maintain Hevelin’s legacy in a genre of fandom with millions of followers.

On another floor in the library, in a room out of sight from the general population, are more of Hevelin’s publications. Zines, self-produced and distributed publications, cover two immense tables. “This is only a couple of boxes here,” Balestrieri says. Some date back to the 1930s or earlier, including materials tied to Hugo Gernsbeck, whose name is tied to science fiction literature’s most famous honor, The Hugo Awards. Ray Bradbury is there, too. And Upton Sinclair. For the UI, one of the most prestigious literary universities in the world, the collection is immeasurably important.

That it is entrusted to Balestrieri speaks well of him. The library hired him before graduation, a rarity. He has many responsibilities, but so far, none are greater than the Hevelin collection.

“He has an encyclopedic grasp of many things,” says Greg Prickman, Head of Special Collections and University Archives and one of Balestrieri’s former professors. “If it’s poetry, or the film industry, or art, he can speak intelligently and with a deep interest, which is important in this field. To be able to sift through (the Hevelin collection) is a challenge, but he’s a natural. That came through even when he was in class.”

The treasures in Special Collections

Early in his master’s work, Balestrieri discovered the section of Library Science that most fascinated him.

“A lot of those projects involved taking gift donations, making assessments about them, writing a lot, and doing research on them. That process of looking at collections as they were coming into the department really kind of sold me. I decided that was what I really liked, that Christmas morning experience of opening that box up and being one of the very first people to see what’s inside.”

The National Center for Education Statistics would consider Balestrieri a non-traditional student because of his age. He was a musician in a previous life. Fans of 1980s and 90s alternative rock and pop likely recognize the band he played with, the Violent Femmes. Balestrieri played saxophone.

A Milwaukee native, Balestrieri was always drawn to libraries, even before his music career took off. His first job was in a library.

“I was just a part-time worker in circulation. I shelved books. I sorted books. I did the really absolutely important and essential grunt work of the library. Even though that’s what I was doing, I really loved it,” he says. “I was a kid in the candy store because, technically, even though we weren’t supposed to, I spent hours and hours and hours there. I just went nuts and started bringing home 20, 30, 40 books at a time. I was 18, and I would usually be reading six or seven books at once.”

That natural curiosity never left Balestrieri. It’s what helps him navigate Hevelin’s collection and other responsibilities within the department.

“He’s very relatable,” Prickman said. “One thing he brings to the department is personal warmth. He’s always right in the mix of things. He’s good for the department and he’s good in this setting.”

Balestrieri is maintaining a Tumblr to showcase Hevelin’s work to the public. Find it at hevelincollection.tumblr.com.