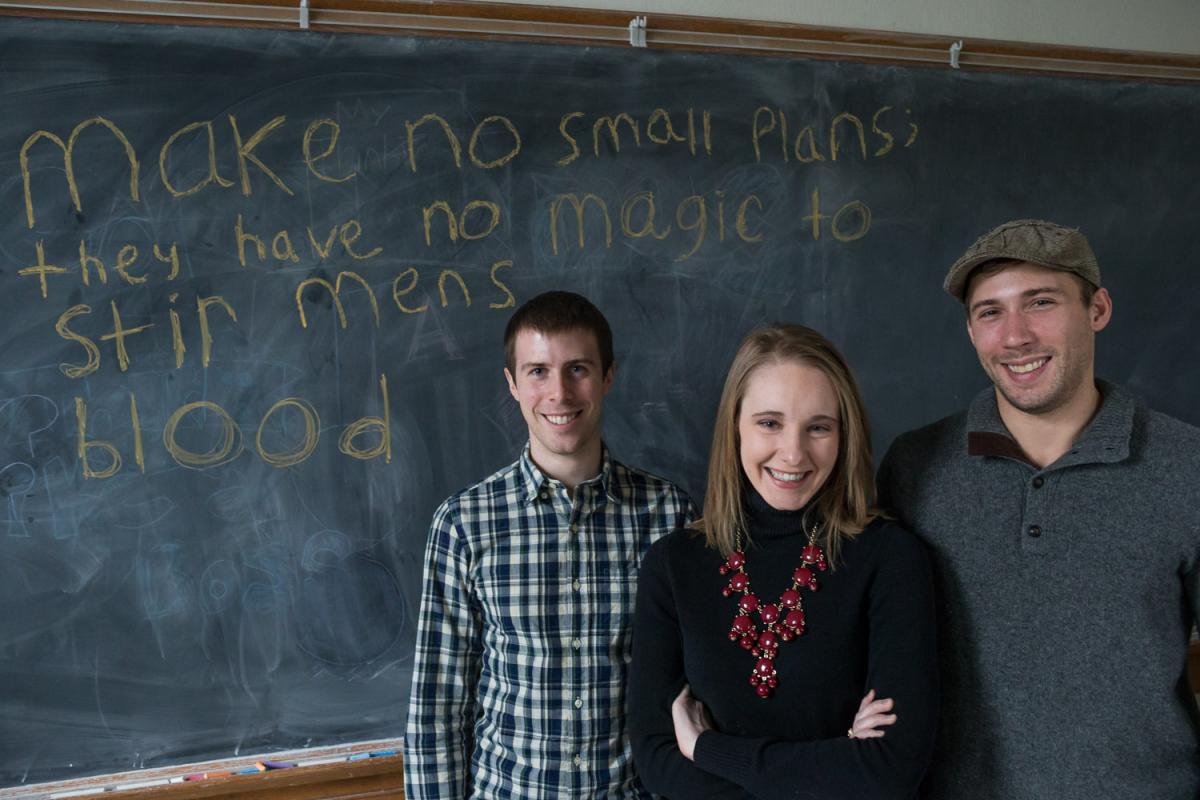 University of Iowa students enrolled in the innovative class, Reimagining Downtown, were challenged to make a positive impact on downtown Las Vegas.

Fourteen upper-level undergraduates had the passion necessary to turn the idea into reality. However, they needed a little direction to execute their plans. That's where three graduate students stepped in to provide crucial mentoring for the course.

The result: a vegan food trailer, Sugarcoat, in the downtown landscape. The food trailer opened in late July.

“This project is not just a business plan, or an education program, or an urban renewal project,” Nichols says. “It's all of those things, and each person in the class brought something different to the table."

David Gould, former Associate Director for Student Development in the College of Liberal Arts and Sciences and Lecturer in the Health and Human Physiology Department, created the for-credit class in Fall 2012 after meeting Zappos CEO Tony Hsieh, who helped launch Downtown Project three years ago.

Downtown Project seeks to transform downtown Las Vegas into the most community-focused large city in the world. Downtown Project committed $50,000 to fund the UI class project.

“The real test is what happens to these 14 people,” says Gould, Director of Imagination for the Downtown Project and adjunct faculty member at the UI's Obermann Center for Advanced Studies. “How will this experience change the trajectory of their lives? The hope is these 14 people, having gotten a taste of doing this, will go and become community builders. That’s really what it’s about.”

The graduate students played major roles in making this “experiment” a learning experience for the undergraduates.

“I hope they learned that no matter what you're passionate about, you can use the tools you've gained through your university education to make an impact on issues that matter to you,” Nichols says.

During the course, the undergraduates brainstormed their own ideas before spending spring break in Las Vegas to learn about the downtown community and pitch ideas to Zappos officials. They returned to Iowa City to pick one idea for the entire group to work on before traveling back to Las Vegas in June to turn the idea into reality.

The graduate students were involved every step of the way, most notably channeling the undergraduates’ immense creativity toward achievable goals.

“This project is not just a business plan, or an education program, or an urban renewal project. It's all of those things, and each person in the class brought something different to the table." Charlie Nichols

The graduate students each offered talents. Bledsoe, a graduate assistant in Gould's Life Design course who helped workshop the idea for the Reimagining Downtown class, excelled at managing the personal dynamics of the group. Three proposals were open for discussion, but only one was selected by Zappos, meaning two-thirds of the students had to contribute to the creation of an idea other than their own.

The pragmatic approach of Nichols and Plagge complemented Gould’s artistic and creative talents.

“As the idea phase ended and the planning and implementation phase began, the project became a fantastic opportunity for me to utilize my knowledge of city code and budgeting to help the students both learn and understand the process of starting a business,” Plagge says.

Gould, in a fun-loving way, called Plagge, “The Grim Reaper.”

“Adam had a way of viewing things that was extremely helpful to me,” Gould says. “His first step was seeing how the numbers were going to work. I had a joke that the students had to pass the 'Adam test.' The students would have a creative idea and Adam would put them through a series of practical questions like, ‘What permits are you going to get?’ and ‘Where are you going to park the truck?’

Nichols helped the students apply what they learned in class toward improving the urban environment. Specifically, he acted as a resource on zoning code and city ordinances necessary for establishing a frozen food truck.

“This was a good professional development opportunity as it allowed me to see the city planning process from the other side as a small business trying to launch, as opposed to someone in city government who would be both regulating small business and trying to encourage them,” Nichols says.

This class differed from other courses in that the majority of time was spent outside the classroom developing the downtown projects.

“The team worked weekends, holidays, and over the summer to make the project come to fruition,” Plagge says. “That type of dedication requires a true belief in the goal and a real sense of belonging. That couldn’t have been achieved in your traditional textbook, lecture, and test.”