Growing up, Bridget Draxler envisioned becoming an English professor at a liberal arts college. Her days would be spent teaching 18th Century literature to inquisitive undergraduates.

As a graduate student at the University of Iowa, Draxler was surprised to discover a key component to add to her plan: public engagement.

In 2009, the Obermann Center for Advanced Studies selected Draxler as a graduate fellow. Draxler participated in a one-week interdisciplinary institute in which UI graduate students from across campus explored how civic engagement can enhance teaching, research, and creative work.

“Going to the Obermann Institute gave me the sense that there could be more to academia,” Draxler says. “It was inspiring to see people encouraging their students to be change-makers in their community. It was really radical teaching. It allowed me to see different possibilities for what a career in academia could look like.” 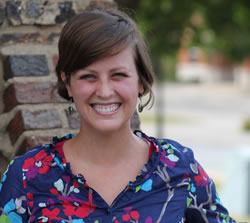 Draxler’s experience at the Obermann Center broadened her career path. Rather than focus a traditional academic position, Draxler began to move toward a position that would incorporate her skills in the digital humanities and civic engagement.

After earning her Ph.D. from the UI in 2011, Draxler began teaching at Monmouth College, a liberal arts college in Monmouth, Ill. She is an assistant professor of English and director of Communication Across the Curriculum, an interdisciplinary writing program that promotes civic engagement and digital tools to help students become better communicators. She also directs the campus writing center.

In February 2013, Draxler returned to the University of Iowa to give a series of presentations about becoming a professor and the role of digital humanities and public engagement in higher education.

In a presentation at the Obermann Center, Draxler said, “My advice is to start small. You might build on other people’s existing projects and contribute to their work or create a mini-community engagement event."

Such projects can open career options for students, which is especially important in a recovering economy. A 2011 report by the National Science Foundation found that nearly half (43 percent) of all humanities Ph.D. recipients lacked job offers after completing their academic programs. In response to the current job climate, Draxler encourages graduate students to consider alt-ac (alternative academic) careers.

“You can work in libraries, teaching and learning centers, centers for civic engagement, interdisciplinary positions,” Draxler said. “There are a lot of really exciting jobs out there that aren’t necessarily in the specific field you are trained to do. Folks who are drawn to civic engagement tend to have wider interests, so it can be a good fit.”

The buzz about civic engagement

At the UI, Bridget served two terms as a HASTAC Scholar. She developed a course in Iowa literature as part of the UI’s UCOL Mobile Application Development Team. The undergraduate course highlights UNESCO's designation of Iowa City as a World City of Literature.

Draxler credits Teresa Mangum, UI associate professor of English and director of the Obermann Center, for inspiring her to pursue publicly engaged teaching and scholarship.

“Bridget has been uniquely imaginative in adapting the gifts of the humanities to her local and academic communities,” says Mangum, who served on Draxler’s dissertation committee and was co-director of the Obermann Graduate Institute in 2009. “She displays an attention to the past, an exploration of the hopes and fears that motivate a society's stories, a commitment to ethical questions, and an openness to diverse perspectives.”

“The Obermann Graduate Institute is something Iowa has that no other school offers for graduate students,” Draxler says. “I feel lucky that people took a chance on me and allowed me to do civic engagement work in my teaching. You have to keep your mind open. This isn’t the path I imagined. It’s better than the path I imagined.”