Hydrogen gas is an excellent fuel for both combustion and electrochemical power systems, including fuel cells.

The challenge for researchers is finding a way to store hydrogen that holds enough of the element to be useful and offers fast access to the energy.

Palladium—a rare, silvery-white metal—can absorb a substantial quantity of hydrogen. However, hydrogen storage in palladium metal is of limited practical use because transporting hydrogen across the palladium interface is too slow. 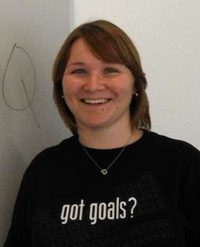 As a master’s student at the University of Iowa, Jessica Reed introduced magnetic microparticles at the surface of a palladium electrode, substantially increasing the rate of hydrogen transfer across the palladium interface by about 12 orders of magnitude when compared with nonmagnetic analogs.

This large rate increase may have practical applications in portable power sources. The implications for hydrogen storage in metals are significant, because other, more common metals also can store hydrogen. These metal hydrides are important in battery technologies such as nickel hydride batteries.

Reed studied with Johna Leddy in the Department of Chemistry at the UI. The Leddy Lab researches innovations in power sources, including batteries, fuel cells, and solar cells.

“My work is certainly not a comprehensive study on this topic, but I hope that it can provide some insight to other scientists who are working to reduce the barriers to viable hydrogen fuel sources,” says Reed, who earned her master’s degree in chemistry in 2012. “Discovery and implementation of new, cost-effective energy sources is critical to the future of our society. I hope this work provides a foundation for future research to build upon.”

This significant research distinguishes Reed’s thesis, “Magnetic Effects on Hydride Storage in Palladium.” Based on her excellence in research, the UI Graduate College has awarded Reed the L.B. Sims Outstanding Master’s Thesis Award.

The L.B. Sims Outstanding Master’s Thesis Award is named for Leslie B. Sims, who was Graduate College dean, associate provost for graduate education, and vice provost at the UI from 1991 to 2001. Sims holds a Ph.D. in chemistry from the University of Illinois.

“I know the quality of students that the University of Iowa produces and the exceptional caliber of the theses that were nominated, so I feel privileged to receive the award,” says Reed, now a Ph.D. student in chemistry at Iowa State University. “Since Dean Sims also studied chemistry, the honor is even more special.”

The award is presented annually to recognize the excellent scholarship and research of UI graduate students pursuing Master's degrees—a group with fewer opportunities for such recognition than students pursuing doctoral degrees.

As the winner of the L. B. Sims Award, Reed received a $500 honorarium and a certificate from the Graduate College. In addition, the Graduate College submitted her thesis as the institution's nomination for the Midwestern Association of Graduate Schools (MAGS) Distinguished Thesis Award.

“Jessica did excellent work in these studies of magnetically modified palladium. She worked largely independently and developed the methods of modification on her own,” says Johna Leddy, associate professor of chemistry in the College of Liberal Arts and Sciences and Reed’s adviser at the UI. “I have been impressed with Jessica’s focus and ability to think through complex problems. This thesis lays the groundwork for many other hydride technologies and provides excellent data for further modeling of this intriguing fundamental puzzle.”

Reed says Leddy has had a tremendous influence on her academic career, starting the first week of her freshman year at the UI.

“(Leddy) taught a freshman honors seminar about one of her favorite topics—numbers,” Reed recalls. “She took me under her wing and mentored me, and I’ve stuck with her ever since. She’s so incredibly talented and enthusiastic about her work. It’s hard not to get excited about electrochemistry when you talk with her.

“She serves as a role model for young female scientists, like me, who are looking for a guide as they navigate professional and family life.”

“I am examining how the learning environment shapes learning goals in general chemistry courses that are taught in high schools, community colleges, and regents universities,” Reed says.