Rengin Firat had not given much thought to her racial identity before she came to the United States from Turkey for graduate school.

While the Istanbul native was growing up, she traveled throughout Turkey because of her parents’ public service jobs. She says racial inequality was a non-issue. 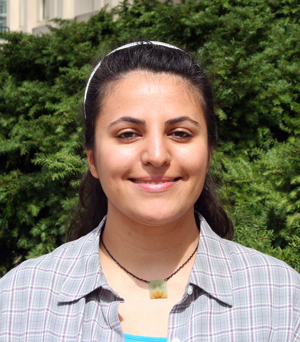 Once she arrived in the U.S., racial considerations became a reality of her daily life.

“I was overtly getting questions about my race, and people were confused about what my race was,” says Firat. “I was surprised not so much at this confusion, but at the fact they were trying to find out my race in the first place.”

Firat, a Ph.D. candidate in sociology at the University of Iowa, is bridging disciplines to better understand why and how the brain divides human beings into racial categories. As a social scientist, she believes it is her responsibility to address major social problems, and her dissertation, “Moral Boundaries of Race: a Neurosociological Approach,” constitutes what she calls “the foundation of a long-term research agenda aiming to understand why prejudice and inequality are so pervasive.”

In 2012, Firat received a Ballard and Seashore Dissertation Year Fellowship from the UI Graduate College to help fund her research. In 2010, she also earned a Summer Dissertation Proposal Development Fellowship from the Social Science Research Council—a U.S.-based independent nonprofit organization dedicated to advancing research in the social sciences and related disciplines.

Firat says problems with large institutions still contribute to inequality, but her research sets aside macro-level social analysis to probe underlying racial beliefs, feelings, and attitudes at an individual level.

“The so-called ‘boundaries’ we create to categorize and sort racial groups exist in people’s minds, yet their outcomes are very real,” says Firat.

She says a vast amount of research demonstrates that moral boundaries legitimize, rationalize, and maintain racial inequity. A moral order is created in which “certain practices, symbols, or characteristics that usually belong to dominant racial groups are valued more than others,” Firat says.

Firat argues that moral boundary-making in the human mind is largely an emotional process, and recent neurological and psychological research demonstrates that our feelings and emotions are crucial in our moral judgments. Firat takes an interdisciplinary approach that combines sociology with neuroscience to examine this dynamic.

Using Magnetic Resonance Imaging (MRI) to scan subjects’ brains, she monitors the reactions of patients while they look at pictures of people from different races. She also employs the lesion method, whereby patients with damage to certain brain regions—in this case regions related to socio-emotional regulation or fear and avoidance—are evaluated using these pictures. In the process, Firat examines which brain regions and emotions are involved in the boundary-making process.

Firat says human biology and the relationship between social and biological complexities of human life have always fascinated her. Since beginning her graduate studies at the UI, she also commenced serious study of biology and the human brain.

While researching emotion, Firat was “struck by the important connections and affinities between the social and neurosciences on the question of the role of emotions in morality and social inequality.”

She discovered a growing body of research providing evidence for the importance of emotions in moral evaluations and judgments. Further coursework in psychology and neuroscience strengthened her view on the key role emotions play in mental processes underlying moral boundary-making.

“I came to an understanding that for a more thorough understanding of mechanisms at the individual level of social behavior, it is crucial to take an interdisciplinary approach and integrate neuro- and bio-sciences with sociology,” Firat says.

Firat credits her mentor, sociology faculty member Steve Hitlin, who has supported her boundary-bridging inquiries and taught thought-provoking graduate seminars considering the sociology of morality from an interdisciplinary perspective.

“When you are a graduate student, establishing yourself as a scholar and grounding your research agenda is very challenging, especially if you are trying to pursue an interdisciplinary scholarly career that is rather new and foreign within your field,” says Firat. “My advisor has made this much easier for me by providing strong mentorship, ample support for my research, and various opportunities for scholarly development.”