Even if you’re not a sports fan who has witnessed a player collapsing in agony as a knee buckles, you’ve probably heard of the ACL and know a torn one is not good. The anterior cruciate ligament (ACL) stabilizes the knee, and a serious ACL injury sidelines an athlete for several months, even after successful reconstructive surgery.

But Austin Ramme’s novel research using 3D modeling may lead to significantly better outcomes for many people—athletes and non-athletes—who suffer this injury.

“Currently most people after ACL reconstructions have a lot of problems with quick turns from straight-line running,” says Ramme, “and that can allow their leg to give way and many of them will fall. A large body of research has shown that if the ACL graft is placed in the correct position, it should account for this type of rotation on the knee joint.”

One of his Ramme’s mentors, Dr. Brian Wolf, professor of orthopaedic surgery at UI Hospitals and Clinics, estimates around 250,000 ACL reconstructions are performed in the United States each year. Wolf says Ramme’s work will “establish a benchmark for expected variability” for surgeons reconstructing the ACL. 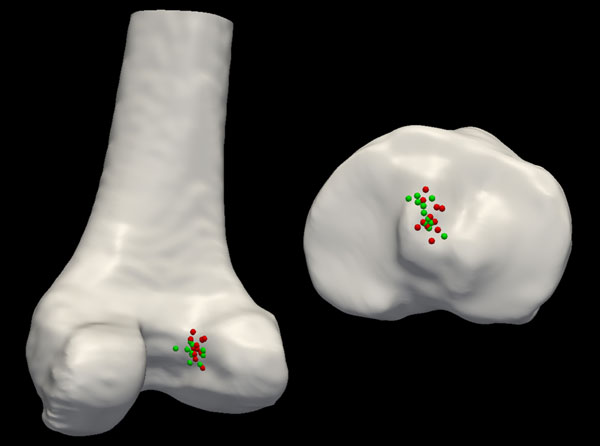 This new benchmark is important because, while this surgical procedure is widely conducted, surgeons have reached no evidence-based consensus on how best to perform the procedure, and results have been uneven. The “revision rate” for ACL surgery in the U.S. ranges from 3 to 15 percent. Annually, that could amount to as many as 37,500 patients who will need a second surgery to address their ACL injury.

A researcher’s work is certainly significant, says Wolf, if it results in surgeons changing how they perform operations.

How important is Ramme’s work?

“This will likely change how some surgeons are performing ACL surgery in their practice,” says Wolf, “and surgeons are not known for being easily persuaded on how they do things. Austin’s work is a large step forward for understanding the technical side of ACL reconstruction surgery. Any future research in this area will need to build on what Austin has helped produce.”

“The impact of an ACL injury is not trivial,” says Wolf. “It often takes six months to a year or more for a full recovery from ACL injury and surgery. For athletes, it means lost seasons. For people working in labor-intensive jobs, it can mean lost work for several months as they recover.”

ACL injuries often are accompanied by damage to the knee cartilage and meniscus, which can lead to arthritis.

Wolf and University of Iowa Dr. Ned Amendola are part of the Multi-center Orthopaedic Outcomes Network (MOON), a national consortium of research hospitals that have been collecting data on nearly 4,000 ACL surgery patients since 2002. The group’s goal is to pinpoint the exact factors in ACL injury and surgery that lead to good and bad outcomes.

However, with any study of such size, there is bound to be slight variation in surgical methodology, and Wolf says the area of “surgeon variability” has never really been studied.

Surgeons reconstruct the ACL by drilling tunnels into the thigh and shin bones to prepare a pathway for a successful graft to replace the torn ligament. The exit points of the tunnel lie at the starting and ending points of the ligament. A suboptimal graft location can lead to poor knee biomechanics and early onset osteoarthritis. There is no standard model for optimal placement.

To establish a standard for tunnel placement, Ramme worked with Wolf, Nicole Grosland, a UI professor of bioengineering, and other colleagues as part of Iowa’s Medical Science Training Program. 3D imaging is key in helping the team gain a better understanding of the nuances of knee anatomy and graft placement.

“The bulk of ACL research has been done with two-dimensional images or just plain x-rays, which lose a lot for the three-dimensional anatomy of the knee, which is more complicated than can be easily seen on an x-ray,” says Ramme. “So we took the extra step of looking at three dimensions to get to the root of the problem.”

Ramme analyzed 150 CT scans of ACL-reconstructed knees. He also helped develop and implement tools to document and analyze the surgical techniques used on each patient.

In addition to differentiating the surgical processes, Ramme also considered varying levels of experience among the surgeons. This allowed for a critical evaluation of the variability between surgeons performing ACL reconstructions.

Next, Ramme plans to use the same 3D imaging to examine healthy knees. He’ll be working to identify the natural insertion point of the anterior cruciate ligament into the bone, noting that the anatomy of healthy ACLs is not yet well-understood.

Ramme sees obvious applications for his work in the realm of sports medicine.

“If we’re able to identify the ideal window for where the grafts should be, we’ll be able to provide the most stable knees for athletes, which will hopefully get them back to where they were prior to the injury,” says Ramme.